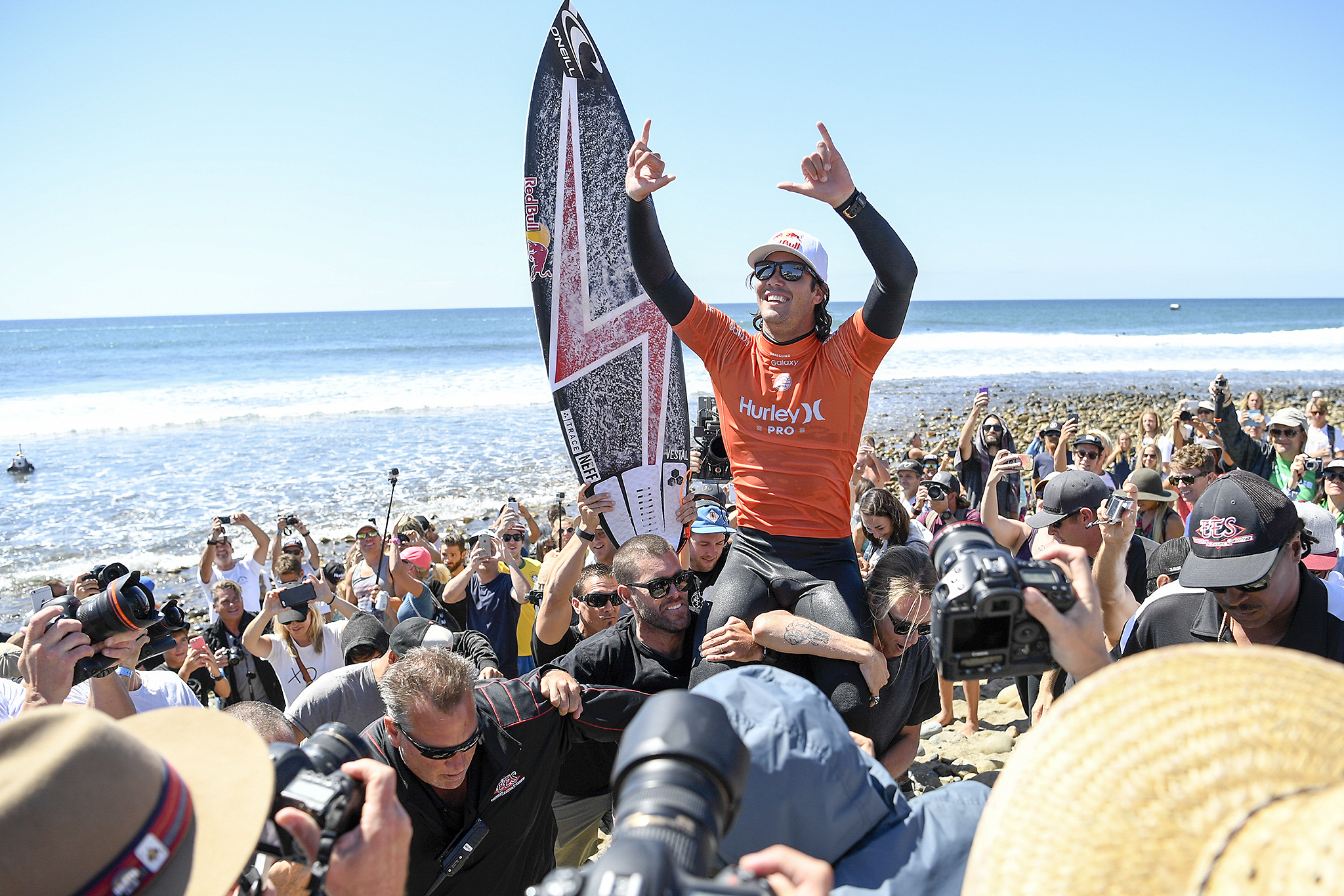 Jordy Smith (ZAF) secured his fifth Championship Tour win today, and his second at Lower Trestles, following an exciting match-up against 2012 WSL Champion Joel Parkinson (AUS). Smith, the 2014 event winner, eliminated Filipe Toledo (BRA) in the Semifinals before matching up against Parkinson. The result, his best of the season, sees him move up one place to fourth on the Jeep Leaderboard and puts him firmly in the World Title race.

“I’ve had a really good surfboard under my feet this event,” Smith said. “I came into the event with an open mind. I missed it last year when the waves were firing so I just wanted to come in and take it heat-by-heat. I’ve watched Joel [Parkinson] throughout my career and he’s one of my favorite surfers. I’m frothing and I’m over the moon.”

Smith, who looked composed and aggressive, took down Parkinson in the men’s Final with his explosive forehand surfing. The two former event winners went head-to-head, but it was Smith who edged the win by just 0.44 points. The South African unleashed a series of power hacks to earn a solid lead over Parkinson and put him in a combination halfway through the heat. Parkinson countered with a 6.93 and a critical 8.43. Without priority and three minutes on the clock, the Australian needed a 7.27 to take the win, but was not able to land the requirement.

“If I can be in with a shot at the World Title this year then that will be great,” continued Smith. “Europe can go either way so I’m just going to try my hardest and see how it goes. I think my Round 4 match-up against Kelly [Slater] was the toughest, so facing him and Michel Bourez was always going to be difficult. Of course that Semifinal against Filipe was a big heat too.”

This event marks Parkinson’s best result of the year and his first Final appearance since the 2014 J-Bay Open where he also earned a runner-up finish. The 2004 Lowers Champion found his form once again, overcoming the in-form wildcard threat Tanner Gudauskas (USA) in a nail-biting Semifinal heat to earn a place against Smith. Parkinson now moves up eight places to sixth on the Jeep Leaderboard.

“I really fell in love with this wave and this town in 2004,” Parkinson said. “This year was another wonderful year at Trestles and I’m really happy to be back here and on the podium — it feels really good. This event I was so motivated and really keen to notch a win up. The talent of surfing in this event is incredible and I have to give it to Jordy, he’s an amazing surfer and a top World Title contender.”

Tyler Wright (AUS) claimed her fourth Championship Tour victory of the season in an all-Australian Final against six-time WSL Champion Stephanie Gilmore (AUS). The win sees Wright retain the Jeep Leader Jersey, increase her lead on the rankings and move her even closer to claiming her first World Title. The result puts her more than 7,000 points ahead of her closest rival Courtney Conlogue (USA) heading into the next event on the CT, the Cascais Women’s Pro. Wright dispatched Laura Enever (AUS) in the Quarterfinals, Sage Erickson (USA) in the Semifinals before facing Gilmore and taking her 9th career CT win.

“It’s been quite a journey from this point last year and a lot has changed this season,” said Wright. “It’s all come together and I’m absolutely loving it. I knew I had to get on the better waves facing Steph [Gilmore] in the Final. Surfing against her as someone I look up to is great, she’s still one of my surfing idols and inspires me to go after things my way.”

The two finalists have shared nineteen head-to-head CT match-ups, with Wright taking her 8th win over Gilmore. Wright opened her account with an excellent 8.50 and 6.37 to put the heat on the six-time WSL Champion. Gilmore charged with a progressive grab-rail attempt to combat Wright, but was not scored high enough to escape the combination situation. With time winding down, Gilmore locked in a 6.00, but still needed an excellent 8.87. With two minutes left in the Final, a set provided Wright and Gilmore one last opportunity. Wright was able to improve her 6.37 with an excellent 8.63 and take the win over Gilmore, despite her near-perfect 9.13.

“I set out with a goal this year and that’s to win every heat and win every final and I’ll go into the next events with that same goal and that same attitude,” Wright continued. “I’ve put a lot of work in and have probably the best team in the world right now. I’m really looking forward to the next event but I’m going to stick with my game plan.”

“It’s the World Title and I think I just decided that I wanted to go for it,” Wright said. “As soon as I decided that, I’ve done everything I know how and I went out and learned what I didn’t know. I’ve been in World Title races before but it feels so much different, I feel so much more comfortable and confident. It’s just flowing for me and I just feel good. I’ve got so much love behind me.”

Gilmore, who posted the highest heat total of the Swatch Women’s Pro in Round 4, previously defeated reigning three-time WSL Champion Carissa Moore (HAW) in the Quarterfinals, Nikki Van Dijk (AUS) in the Semifinals before taking on Wright in the Final. Today marks a return to form for Gilmore and is the first time since April last year that she has made it out of the Quarterfinals. The runner-up finish sees the 2014 event winner move up from 7th to 5th place on the Jeep Leaderboard.

“I love this place and this wave so it’s really nice to come here and get a good result,” said Gilmore. “The World Title race is really heating up and it’s great to watch. Congrats to Tyler [Wright]! It’s so rippable here and such a fun wave. My goal is just to win an event this season. Since my injury I haven’t really put together a complete performance so we’ll see what happens heading into Europe and in Hawaii, which is a favorite.

“I was feeling really good, felt like my surfing was really good and Tyler was always going to be the toughest opponent in this event so of course it stings,” continued Gilmore. “I think any loss stings but it’s a great result. I’m happy about it and glad to move up the rankings a bit. I think this is great confidence building for me and I’ll move into Portugal feeling pretty good.”