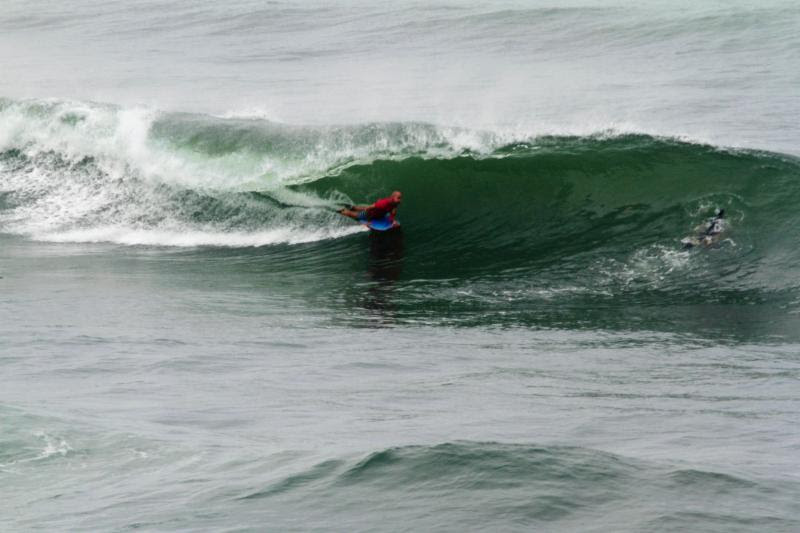 Mike Stewart was on fire for the third event of the Kellogg’s IBA Hawaii Bodyboarding Tour on the Big Island. The Millers’ Surf Big Island Challenge was scheduled to be held at Banyons in Kailua Kona. Support from local officials made it possible to utilize the best possible surf near Hilo at a river mouth spot called Honoli’i. Stewart surfed like a kid in a candy store utilizing the best possible waves and winning every heat on his way to the final. “I was very selective”, said the 52 year old World Champion surfer. “I also really applied myself on every wave I caught even if it didn’t end up being a great wave. The fact that most of the waves were hollow I think played to my advantage as I was able to do combinations of moves in and around the tube, something I have quite a bit of practice at.” Surf was superb ranging 4 to 6 feet and with mostly glassy conditions during the event as rain fell on the Big Island. Stewart has also been an organizer for the 4 event series that challenges Hawaii’s bodyboarders. “The idea of this tour is to present a forum for bodyboarders of all disciplines to come together and exchange ideas and challenge each others skills. I want to push the level of riders to be the best they can be. Competition can teach you how to improve your strengths and shed light on your weaknesses and ideally how to be composed and mindful under pressure. These are useful life lessons.” In the final Stewart scored 16.5 points on two rides and behind in second was David Phillips with 13.56. Sammy Morretino from Koloa, Kauai took third with 11.84 and leads the tour at this point. Morretino who turned pro this year also won the Stand Up & Drop Knee divisions. Mack Crilley took fourth. The tour takes quite a bit of organization to stage and Mark Waldo at Millers’ Surf Shop was instrumental to having the event on the Big Island. He is looking forward to next year! The next Hawaii tour competition is on Oahu on the west side, December 18, the week end before Christmas. That event will decide the 2015 overall Kellogg’s IBA Hawaii Tour Champions. For tour information go to the IBA Hawaii web site. www.ibahawaiitour.com
https://www.facebook.com/ibahawaiitour