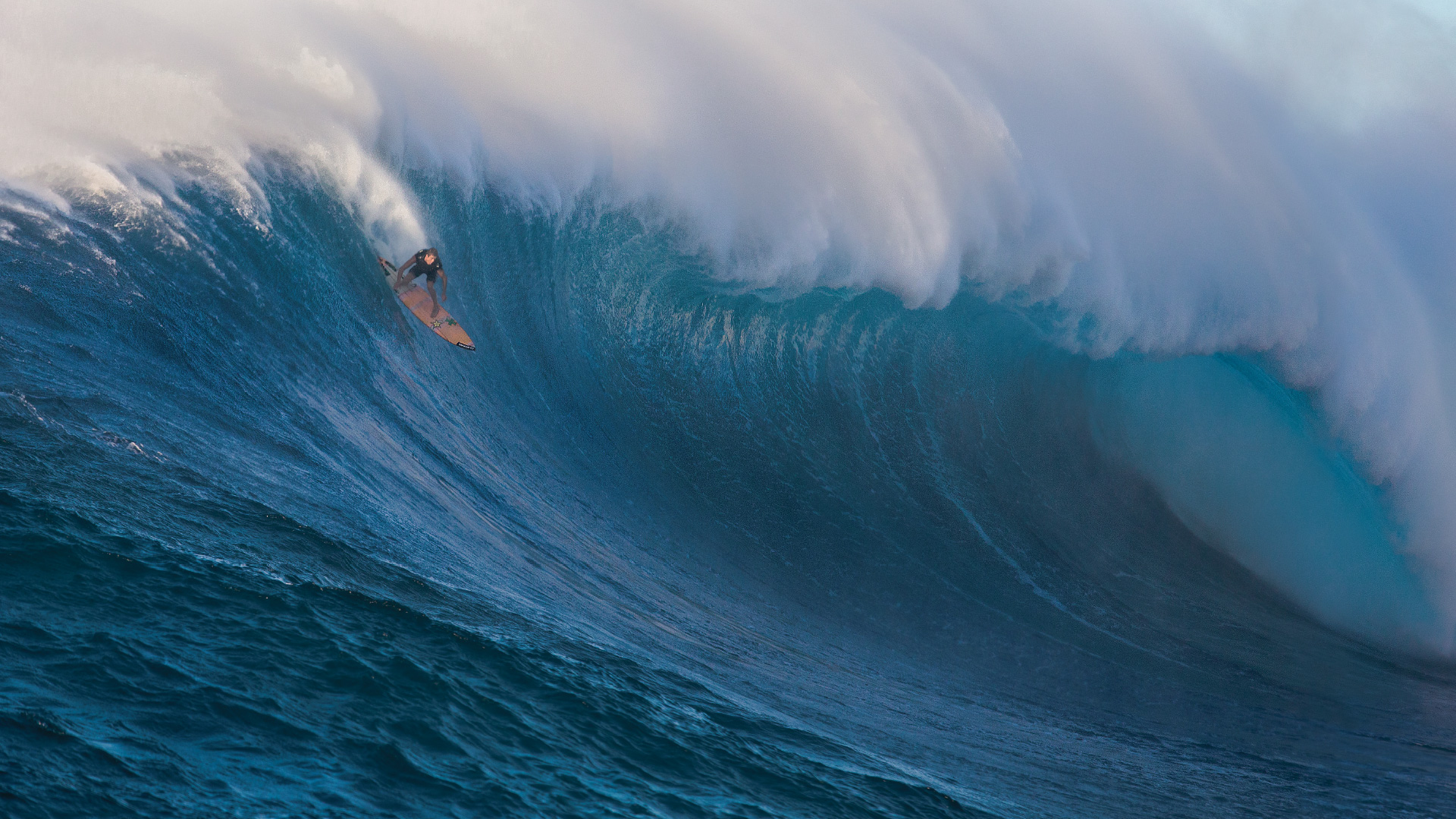 This was the initial reaction from the filmer who, seconds prior, captured Albee Layer’s backside double spin, otherwise known as the first ever backside 720. It was November 18, and as the footage continued to roll, Albee thrust his fists out of the foamy, windswept sea and into the air.

To say that the trick was a long time in the making would be an understatement. “At the beginning of last year, I got so close [to landing the backside 720] that I said I could do this,” Albee said in the edit showcasing his achievement. “The mental step was done. It became just a matter of time and getting the right wave. I started getting closer [to landing it]… At that point I was fried from El Nino year, it was taxing on my body and head. I was pretty much furious by the end of year, I tried I don’t know how many sessions, so many broken boards, just hurting my body over and over again. I was putting so much into it, but I wasn’t doing it. I wasn’t making it. I knew I could, it turned into this giant monkey I put on my shoulder to just do it already.”

Albee continued to apply pressure on himself to perform, and in the early fall, the 25-year-old pulled it. Nailed it. Completed it. Pau.

No one filmed it. So on November 18, he paddled out again into the churning Maui sea, and the session started off poorly. In Albee’s own words, “it sucked”. An hour and a half into the session, Albee thought about paddling in. Suddenly, a wave came through and he was up and riding, the face perfectly groomed for a take off and he was in the air spinning and spinning. On land, his filmer was locked in, capturing the grand collision that occurs when opportunity meets preparation. Then came the idea for champagne, the fists in the air and Albee returned to the beach, dried off, changed, drove home and slept probably the best in recent memory.

“I’ve never had that freak capability people have like John [Florence], [Clay] Marzo or Matt [Meola] do in the air,” Albee said, reflecting in the edit. “For me to do a trick like this… was just to spend more time than anyone else, to be stubborn and not get discouraged after falling a million times.”

This innate stubbornness has put Albee on the forefront of the progressive surfing movement, inserted him into some of the biggest Jaws waves and made his name known throughout the global surf community. We sat down with the Maui boy to hear more about his backside 720, why he’s taken the path less traveled in his surfing career and why “even your heroes can be wrong”.

Let’s start with your roots, Albee. What is it like growing up on the Valley Isle?

At a young age, you learn outdoor skills. That cool rootsy stuff, you know, country vibes. Having a rootsy skillset is really cool. Maui, it’s secluded, and because of that, the friends you have become family. Every day you’re with the same group of friends, and it’s been that way since your early years. Not many people can say that.

Right, very few people. So how has Maui molded your surfing skill and style?

I never learned how to surf crowds or really good waves for that matter. In a way, I really like it. I don’t do well surfing anywhere crowded. Most of what we surf is secluded, it’s just a couple friends, and that can be good and bad. The waves are windy and choppy, but that’s helped us to not be spoiled. I didn’t have waves to practice turns on, the waves were too bumpy and windy. The flip side of that is that I focus on airs, and I’ve learned to surf waves that most people don’t like.

What about the genesis of your surfing? Was it just natural for you to take to the water growing up on Maui?

Yeah, it was a natural thing. My parents were windsurfing when I was a baby, so I grew up at the beach. Naturally, that turned into playing in the shorebreak, and then they would take me out surfing on the front of their board. I never remember learning how to surf, it’s just something that was always there.

Was surfing as a career ever a goal, or something that came to fruition?

There wasn’t ever a point where I said ‘surfing is going to be job’, I had always hoped it would turn into a career.

That was a huge turning point. Up to then, I was only making a few hundred dollars a month from sponsors, and was thinking about getting a real job and giving up the whole dream. Once Matt Meola won the first year, everyone rallied behind me to do it the following year. When I won, I was so relieved, just so stoked. At that point, I knew I’d have a real shot at making it.

“Making it” is different for everyone, and you especially. You haven’t followed the trajectory of grinding it out on the QS – did you always want to be a freesurfer?

While doing NSSA’s, I used to tell coach Rainos [Hayes] how I wanted to be a freesurfer from a really young age, around 12-years-old. He told me that even Dave Rastovich won the World Juniors before he became a freesurfer. I said ok, I’m going to do the contest route as long as I can, but freesurfing is my end goal. Even before I won Innersection, it wasn’t looking to good. I almost gave up before that.

Matt Meola, Dege O’Connell, Kai Barger, Billy Kemper and others: this is your circle of influence. Those are all well established names in the surf industry, and all for different pillars of the sport. What’s it been like to be influenced by them?
It’s cool and special that we get to push each other. In the group, one guy is better in small waves, another in big waves…to try and be better than everyone in our group is a high standard. We’re all similar, but different at the same time. I contribute all my success to my friends, because without them, I wouldn’t have surfed Jaws, I wouldn’t have won Innersection or even tried to compete and even filming, that started with us filming each other.

Did they help push you to try for the backside 720? We’ve all seen the edit, which shows how hard you worked to achieve it. And furthermore, do you think it should be called a 720? Or 540?

A 720, because Tony Hawk said so. And here, the wind is blowing into lefts, and as a group we’re always trying to figure out the newest air. There’s always different reasons for progressions, but what it comes down is that we would get bored surfing if we didn’t do that. That’s something we need to do to have fun instead of staying stagnant. I’ve gotten close a couple times. I’d gone through a similar thing with the first double ally oop, so I knew the whole process of learning a new trick for myself. It can be annoying and hard and it hurts but I still think it’s worth it, because when I landed the ally oop it was the happiest I’d ever been achieving a personal goal, almost as happy as I was when I won Innersection.

What was the reaction from the surfing community on the trick, from your perspective?

These days, tricks get written off as a sideshow, but they’re not. Surfing has to progress for everyone to stay interested. If you’re doing the same thing for so long… My goal is not to do a novelty trick, I want to be able to do what was thought to be impossible. It helps move surfing forward.

Is that essentially the your motivation? Moving forward?

Yeah, that’s my biggest passion: just moving forward, in all parts of my life. If I’m not progressing, I can’t deal with that. I have to be moving forward, whatever I can do to nudge in that direction I do. That time it was on footage, I was super happy, just relieved. I felt the weight off my shoulders. I could go and try the next thing. I would have felt stuck if I had moved on without pulling it. I would have felt like a failure, but I was able to get it done…It felt like a million pounds off my shoulders. The session sucked all the way into the moment, and that’s how the sessions are up until the moment. It’s frustrating stuff until it all comes together, and it’s typical surfing in Maui in general. Lots of wash throughs. During the session when I made it, about an hour and half into it I almost just went in. But somehow a good wave came through and it all worked.

It seems like regardless of circumstance, you weren’t going to quit until you achieved the backside 720.

I don’t have natural knack for doing airs. I’m 6’2” and have the build of a turn guy. But I’m stubborn. And when I try to learn new tricks, this helps me a lot because I keep trying even when I should give up sometimes.

So what’s the next goal?

Finishing the next movie we’re working on is the first goal. With airs and surfing, I want to do more flips and corks. I need to keep moving forward, just going on really big waves and trying really hard. Some of my ideas are far fetched, but in the last 10 years, I’ve seen so many people do things that were previously thought of as facts that you couldn’t do. An example is paddle surfing Jaws. It was a fact that you couldn’t paddle Jaws. Obviously it was so wrong, there’s no reason we couldn’t have done it earlier. It’s about taking the ideas that seem stupid, but realistically are not and doing them.

You mentioned earlier the driving force behind your motivation is moving forward. Is there anything else motivating you?

A lot of people wrote off my ideas when I was young. Some of those ideas have happened and ended up being good ideas. So for me, it’s about trying to make it easier for the next kid, so that if he/she says I want to do this and this and someone says that sounds dumb, he/she goes for it anyway.

Like paddling instead of towing Jaws: what’s it like to have been on the forefront of paddling Jaws?

It’s so cool that our group of friends has been instrumental in something that affected all of surfing. The towing versus paddling deal affected how everyone paddled across the world. There’s big names like Shane Dorian, but there’s also little characters, local guys that helped the progression too. I said a long time ago we should start paddling it, but I let it go. I should have just done it.

Is that your advice to the younger generations? To just go for it?

It’s really important in terms of progression to have respect for heroes and people that did it before you, but don’t accept everything as fact. It’s ok to question. Even your heroes can be wrong. I grew up looking up to Laird [Hamilton] and all those guys, they didn’t start paddle surfing but they’re still my heroes. They were completely wrong about a huge thing. Just because everyone says one thing doesn’t mean it’s right, and if everyone says you’re stupid for doing something a certain way or maneuver, they’re probably dumb.