When you see this crew of young surf friends, it’s hard to believe they’re still junior pro surfers. This has been THE crew to watch as of late, whether it’s competition or free surfing.

From my experience, I have been watching these kids ever since they first started paddling out on the North Shore. They all shared that naturally stoked attitude and were always smiling and frothing in every situation… especially when they were trying to burn you… 🙂

Nearly a decade later, those same faces are now frequently seen in the surfing limelight. Consistently competing and winning in expert level world qualifying contests, as well as national and world junior championships, these boys are coming up quick. One of their more recent milestones was the ISA World Junior Championship in Ecuador, which took place this past spring. An all-star team of misfit talent banded together to win the team gold medal, the most prestigious award of the event.

As our homage to crews who accomplish great things, we were reluctant to catch the crew on the fly as they were on the threshold of a Bali adventure of a lifetime.

What makes you guys a crew?

Seth: We grew up together, we surf together, we do everything together. We live close to Noa (Mizuno), and Kaulana (Apo) usually stays with us all summer long.

Josh: It naturally happened, we were all doing several contests together at a young age.  We always surfed together and developed a strong bond.

Noa: We push each other’s limits and that helps progress our surfing.

Kaulana: Yup, what they said.

Tell me about some of your earliest experiences together?

Seth: We all surfed Waikīkī together early on. Noa moved in down the street when we were around 5 years old. We skateboarded down the street together and became good friends quick. We met Kaulana at one of the surf contests our parents put on at Queens and we’ve been hanging out ever since.

(Everyone nods in agreement).

What’s everyone’s role in the crew?

Seth: Josh tries to be the leader.

Seth: Kaulana is laid back and down to do whatever we want to do.

Josh: Noa is the grom, Seth is the lipper.

If you could name your crew, what would it be?

Seth: We don’t really have a name.

What do you guys do when you aren’t surfing?

Seth: When the waves are small, we like to go fishing or diving. Or if the water is dirty, maybe go play some golf. There is always something to do.

Are you guys pretty competitive amongst each other?

(Everyone nods, smirks and laughs immediately).

Noa: Yesterday me and Seth got into it pretty big.

Josh: Noa thinks he’s the best at everything.

Josh: Every time we do something it ends up in a fight.

Josh: At the end, there’s always someone who’s screaming and eggy.

Do you guys have nicknames for each other?

Does your crew extend beyond just the core four?

Josh: Yeah, we got a lot of other people in our crew also. Along with my other brothers Isaiah and Micah we have The Yamakawa’s- Kylen and Cole- then there’s Kaito Kino, Geno Sano, Liam McTigue, then there’s other guys…There’s so many!

Noa: A lot of outer island kids too.

Josh: Zeke Lau. When he’s home he always hangs out with us… Surf, do whatever. Yeah, we always have a big crew. We never go with just a few people, there’s always about 8 of us. I don’t think people really like it, but it’s fun.

You are all out surfing together, what’s happening?

Seth: We don’t really have a priority system.

Josh: Whoever is out the back first gets the first good wave.

Seth: We don’t snake each other. It’s like ‘he’s been waiting awhile, go!’ We all end up getting waves.

Noa: Josh does that all the time.

Kaulana: Seth is usually dropping 10 footers at Pipeline while Josh is going on a 10ft Backdoor. All the while, me and Noa sit on the sidelines, taking notes.

Who got the best barrel to date?

(Everyone points to Seth).

Noa: Either Josh or Seth.

Kaulana: Definitely not me haha.

(Everyone points to Josh).

Seth: Josh’s airs are crazy. How inverted he gets… (Showing example with hands) … before he lands, the nose of his board is upside down. He always lands in the most critical areas.

(Josh and Seth point to Noa and Kaulana).

Josh: It’s between these 2 guys.

Seth: Kaulana has the most styled out carves.

Josh: We all suck. Kylen (Yamakawa) is the best free diver we surf with. But amongst us, it’s got to be Seth.

Kaulana: I’m the worst; I never shot a fish yet haha.

Noa: Seth caught the biggest fish, he got lucky.

Who gets the girls?

Josh: Me and Seth go home school so… nothing really.

Who has the odd habits?

Noa: We all have pretty odd habits. Seth picks his nose.

Josh: Seth will walk out to the freeway at 2 in the morning.

You’re all stranded on a deserted island, who survives last?

Noa: I don’t know brah. Punahou could be my advantage on this one.

Josh to Noa: No, you’re book smart, not survival smart.

Kaulana: (boldly) I would last the longest for sure!

(The other 3 laugh in disbelief.)

Josh: No you would not! Haha.

Noa: You wanna give us a theory on that?

Last words before you guys embark on your trip?

And then they went to Indo… 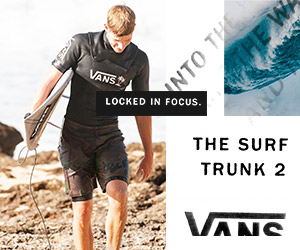