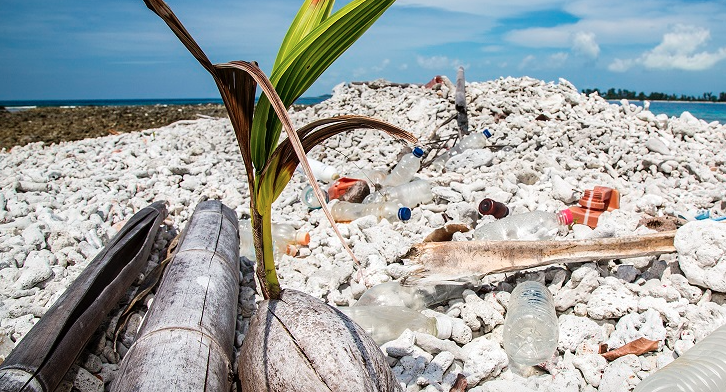 The Race for Water Odyssey Faces Plastic Pollution in Palau

Beloved by scuba divers, this paradise-like archipelago turned out to retain a lot of plastic pollution as the R4WO discovered on the four beaches it studied. Selected in collaboration with Dr. Pat Collins and Dr. Andrew Bauman, these beaches showed that the archipelago is suffering from the effects of marine pollution, despite its distance from the trash vortexes of the Pacific Ocean. While the latest samples taken from the North Pacific revealed a large quantity of micro and macro plastic waste, the R4WO team was most surprised by the quantity of macro plastic pollution found on Koror. The field team was confronted with beaches filled with a great amount of well-preserved trash but relatively free of micro plastic particles. Kim van Arkel, scientific advisor of the expedition, explains:
“Although this archipelago is not located directly within a vortex, ‘local’ pollution may play a big role. In fact, Palau finds itself near countries like China and Indonesia. Therefore, it is very likely that they are the source of a large part of the objects that wash up onto the beaches here. The local character of this pollution also explains why many of the items found are in good shape, since they have not yet had the time to disintegrate or be chewed up by marine animals. Furthermore, typhoon season is well underway, which may explain the low amounts of micro plastic pollution on these beaches. With that in mind, it would be premature to conclude that the archipelago is not affected by this kind of pollution.”
Following these investigations, the Race for Water Odyssey set sail today and will reach the Chagos Archipelago in about ten days. There, it will begin analyzing plastic pollution in the Indian Ocean’s trash accumulation zone (trash vortex) in order to continue to build its global data corpus.
Click here for more information about the program in Koror:
http://www.raceforwater.com/steps/koror-island
Click here to follow the expedition live:  http://www.raceforwater.com/race_for_water_odyssey/map