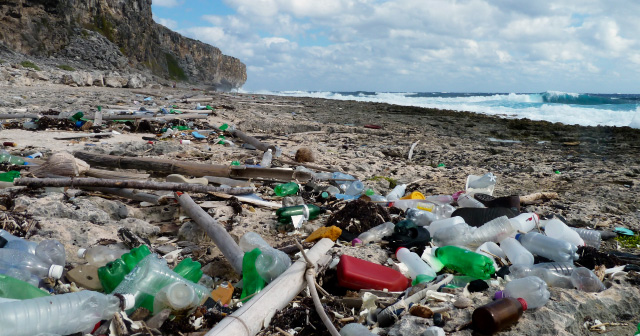 The Ugly Truth About Plastic

Did you know that nearly every piece of plastic that was ever created is still on this planet today? And majority of it finds its way into our oceans? Plastic bags, plastic bottles, plastic forks, even your old collection of Ninja Turtle action figures end up in a salty plastic soup. These are not the kinds of waters we want to be swimming and surfing in.

Equatorial currents have taken millions of pieces of floating plastic and concentrated them into a swirling trash vortex between Hawaii and California. This particular vortex of ocean currents is known as the North Pacific Gyre and is one of five major oceanic gyres. 5 years ago scientists believed that a trash vortex the size of Texas had gathered in the North Pacific Gyre. Today it is estimated to be the size of the continental United States. All five oceanic gyres are believed to contain plastic.

“The Pacific Trash Vortex in now the size of the continental United States.”

Many people envision a giant floating island of plastic, however this is not the case. There are no visible islands of trash anywhere; instead imagine an ocean soup laced with plastic and chemical sludge. But just because we don’t see the damage in our immediate ocean surroundings, doesn’t mean it’s not there.

“Scientists estimate that there are 46,000 pieces of plastic in every square mile of ocean.”

This number continues to soar with an increase in manufactured plastics each year. More than 60 billion tons of plastic are produced each year, and less than 5% of that is ever recycled. 20 billion pounds of plastic ended up in the seas this year alone. Many believe the Pacific Ocean trash vortex is a bigger issue than any war, economic, or ecologic crisis facing the planet today.

The 2012 NY Times article, “A World Without Coral Reefs” stated that in 20 years our world could end up with no coral reefs – which means our oceans will revert back to the primordial sludge it was before creatures walked on land. This article is quoted in the critically acclaimed, multi-nominated documentary, Aqua Seafoam Shame, which details the shocking reality about plastics. Aqua Seafoam Shame held its Editor’s Cut World Premiere at Surfer the Bar on Oahu’s north shore on May 31st, 2013.

Film director Veronica Grey (a.k.a The Surf Lady) and producer Kim Chiasson, in association with Hope Studios brings us the first ever feature length film shot on an iPhone 4, regarding the ugly truth about plastics in our ocean. 25% of the earth’s surface is diagnosed as garbage landfill. The amount of plastics in the ocean has caused the man-made material to begin leaking into the food chain and will continue to negatively affect wildlife, human health and the environment. The actuality of plastics overtaking our oceans is very real and needs our attention.

“25% of the earth’s surface is being used as garbage landfill while only 11% is used to grow our foods.”

A powerful quote fills the black screen of Aqua Seafoam Shame during a scene transition… “We are the problem and we are the solution” (pacific-tv.com). How true that we are both the creator and the remedy of this catastrophe. While the alarming statistics could fill the remainder of this article, focusing on the solution is the path to progress.

The biggest step we can take toward reducing our plastic usage is by eliminating “single use plastics”. These include water bottles, food containers, utensils, straws and plastic bags.

On January 11th, 2011, Maui and Kauai’s ban on plastic checkout bags went into effect. January 17th, 2013 marked the first day that the “plastic bag reduction ordinance” went into effect on the Big Island. In April 2012 Oahu joined its neighbor islands by also banning plastic bags, which goes into effect July 2015. Hawaii gained notoriety as being the first state in the entire nation where every county has plastic bag legislation.

This is a large-scale example of the country’s movement toward plastic reduction, but it’s also the little changes that make a difference. Below are other ways YOU can help, so be sure to spread the word.

Invest in a reusable water bottle. We go through 2 million plastic water bottles every 5 minutes, so please help lower this number.

Keep canvas bags in your vehicle. This will remind you to use reusable bags for every purchase.

Carry a fork from home with you. You can use it in place of plastic utensils at restaurants, drive-thrus and take-out dining spots.

Find your everyday plastic items in alternative packaging materials. Nowadays you can find compostable packaging for a lot of your household items such as beeswax-coated wraps for food storage, glass jars, aluminum cans and paper cartons.

Invest in compostable garbage bags. Most plastic trash bags are non-recyclable and therefore end up in landfills… and out to the ocean. Compostable bags break down.

For to-go drinks, skip on the plastic lids and straws. Or better yet, bring your own container from home! Some coffee shops give you a discount if you bring your own mug.

Use matches instead of disposable plastic lighters. Small plastics like lighters are targets for bird, mammal and other sea life consumption.

Knowledge is power and power is forward motion, so lets keep the wheels turning and work toward cleaner oceans for future generations to enjoy.