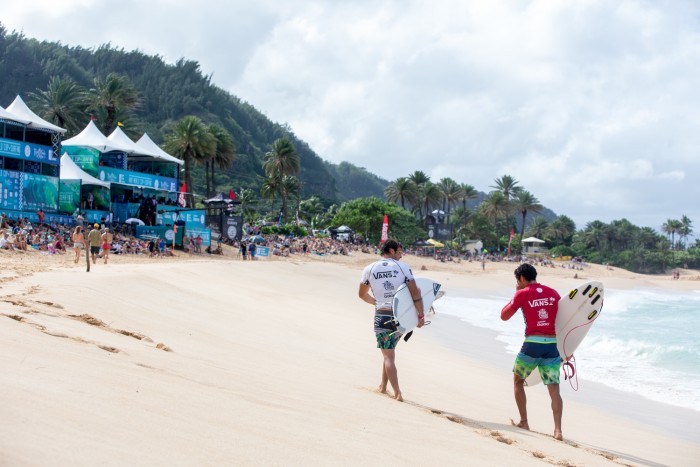 The solid swells finally arrived at Sunset Beach in Hawaii as Round 1 and two heats of Round 2 of the Vans World Cup of Surfing were completed.
Surfers had to call on all their ocean skills and experience battling a rising double overhead swell with strong winds making conditions extremely testing.

A few of the standout international performers included Australia’s Yadin Nicol who charged the waves to take a comfortable Round 1 heat win. Other Australian’s to advance included Thomas Woods and Mitch Crews (Gold Coast). Unfortunately Wade Carmichael from NSW’s Central Coast was a shock Round 2 elimination – Carmichael won the opening event of the Hawaiian season last week and a reasonable result in this event would have secured him a position on the elite 2016 tour but those hopes now look gone with his Round 2 heat loss today.

South African surfers Benji Brand and Beyrick DeVries both revelled in the powerful conditions served up by one of surfings most challenging and dangerous waves. Brand surfed twice and has advanced to Round 3 while DeVries comfortably progressed through his Round 1 heat and will surf his Round 2 heat tomorrow.

Brazilian surfers Bino Lopes, Thiargo Camerao and Willian Cardosa all advanced through Round 1.

Hawaiian surfers were obviously prominent as well in the solid surf with Joel Centeio a standout along with Kaito Kino, Mason Ho and  Jamie O’Brien  all revelling in the surf and advancing.

The swells are expected to remain big and the action should be spectacular tomorrow when the event resumes.