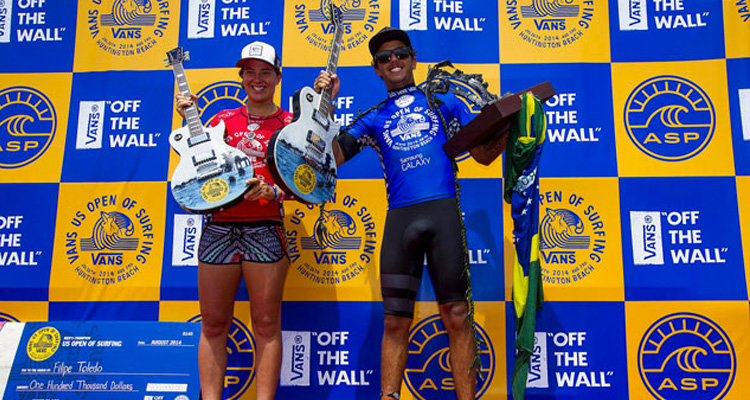 Wright and Toledo Claim Van’s US Open of Surf

Tyler Wright and Filipe Toledo reigned supreme on the final day of the Vans US Open of Surfing. Wright has been crowned champion of the Women’s event, stop No. 6 of 10 on the 2014 Samsung Galaxy ASP World Championship Tour, while Toledo has won the Men’s ASP Qualification Series (QS) Prime event.

Tyler Wright battled back in her Final clash against five-time ASP Women’s World Champion Stephanie Gilmore (AUS), 26, to collect her first victory of the 2014 season. Gilmore got off to a strong start, but Wright connected strong outside turns with critical snaps on the inside reform, earning an excellent 8.67 followed by a crucial 6.10 under Gilmore’s priority for the win. Wright previously dispatched Malia Manuel (HAW), 20, in the Semifinals and her win at Huntington Beach moves her to No. 3 on the rankings.

“It’s been a long event and really enjoyable for me,” said Tyler Wright. “I wouldn’t be here without my team and they mean the world to me. All the girls have been ripping this entire event and it’s been wonderful to see. I felt really relaxed and comfortable and everything has gone really well for me this week and I loved it.”

Stephanie Gilmore, 2007 event winner, was a standout throughout the entirety of the Vans US Open of Surfing, effortlessly dissecting the challenging Huntington Beach lineup with her signature style. The Australian started strong in the Final, but was unable to match Wright’s scores in the back half of the heat. The runner-up finish marks Gilmore’s third Final appearance of the season, placing her at No. 4 on the rankings.

“When you do your throwaways I guess I’m in a good spot,” said Stephanie Gilmore. “You can’t really calculate too much right now. More than anything, I’m excited for the rest of the year and to be able to surf Trestles, France, Portugal and finish the year off in Honolua Bay.”

The all-Brazilian Final saw flyboy Filipe Toledo take on powerhouse Willian Cardoso (BRA), 28. Both Toledo and Cardoso relied on their respective strengths to achieve excellence early. Toledo launched an 8.73 to start while Cardoso collected a 9.03 for three big backhand hooks. Toledo locked into an additional right, lofting an additional aerial combo for an 8.73 and the Vans US Open of Surfing win.

“I’m super stoked and excited,” said Filipe Toledo. “It was an amazing heat against Willian (Cardoso). He’s been surfing really well the whole competition. I just turned my game to the air game so I could do what I love to do and it worked. I had to surf though a lot of pain with my ankle (following a sprain in Africa) and just put it out of my mind. I felt comfortable in these conditions. I won the junior in 2011 and was just feeling confident throughout the week.”

Willian Cardoso surfed with unmatched power despite the smaller conditions on offer in Huntington Beach, with the gentle giant demolishing the competition en route to the final. Cardoso was unable to match Toledo’s aerial attack in the final, however, finishing runner-up overall. Cardoso’s second place finish moves the Brazilian to No. 12 on the ASP QS.

“I’m really happy with the result,” said Willian Cardoso. “It’s a nice event. I’ve been surfing well all month and everything felt right but until now I haven’t got the result. This has given me confidence for the rest of the year. It’s amazing to be here and it will really help me at the other events.”