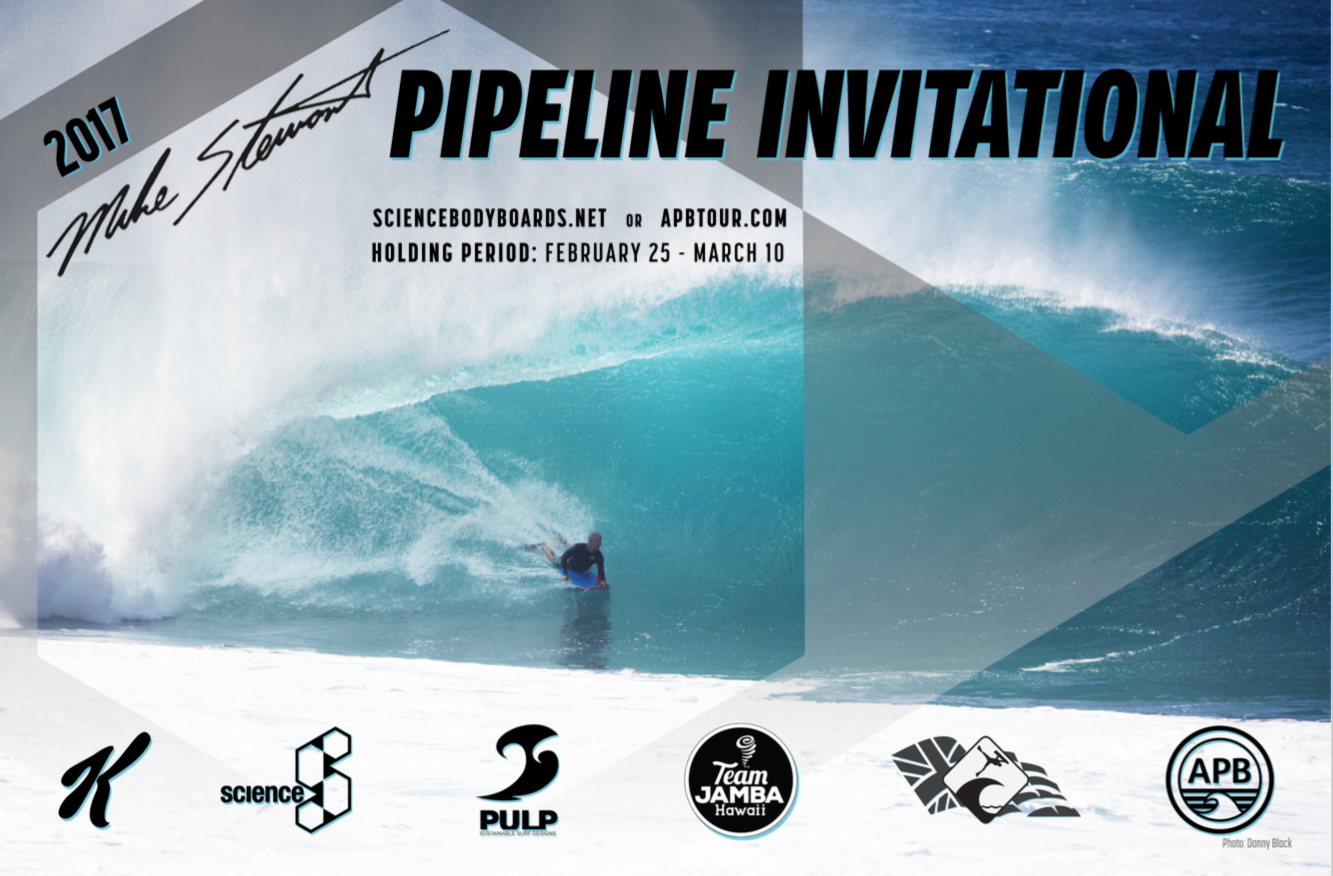 North Shore, Oahu, HAWAII – (February 23, 2017) – The highly anticipated 2017 Mike Stewart Pipeline Invitational will kick off in double overhead surf this weekend on the North Shore’s ultimate proving grounds: The Banzai Pipeline.
A prize purse of $16,000 is up for grabs within Men’s, Women’s DropKnee and Junior divisions throughout the 3-day contest.
The competitor seedings for the annual event include the Top 16 athletes from the Hawaii Bodyboarding Pro Tour, the Top 26 competitors on the Association of Professional Bodyboarders (APB) World Tour, and an invitee list of underground locals and Pipeline specialists.
“This year, there is a fresh crew of different riders competing,” said 9-time World Champion Mike Stewart. “This includes guys who are known as great riders but aren’t necessarily on Tour, competing against Hawaii’s best and the World’s best. It’s a great opportunity to showcase their talent and their skill in an arena that offers great waves.”
The competitive field includes Stewart, last year’s event winner Pierre-Louis Costes, 6-time World Bodyboarding Champion Guilherme Tamega, Jeff and Dave Hubbard, who both have a World Title trophies, and Hawaii’s shining talent in Tanner McDaniel and Sammy Morretino.
“There’s different groups of competitors vying for supremacy at Pipeline, from Hawaii Tour members, World Tour athletes and underground assassins,” said Hawaii Bodyboarding Tour Organizer Norm Skorge. “It’s really anyone’s game, really.”
Skorge also discussed on how important it is to have a heavy presence of Hawaiian competitors in the contest.
“We have 16 of Hawaii’s top bodyboarders entered into the competition, not to mention even more invitees,” he said. “We’re very conscious of the importance of having local talent compete, and we want to make sure Hawaii is represented in an event that runs at Pipeline.
The holding period for the event is Feb 25-March 10.
“We’re keeping an eye on the forecast, and although we won’t make a call until 24 hours beforehand, it’s highly probable that we will run the early rounds on the first day of the waiting period, this Saturday, and continue the contest into Sunday,” said Stewart.
For interested fans and media, an autograph session featuring the top competitors will be held at Pearlridge Mall from 1-3pm on Feb. 25.
“A big Mahalo goes to our sponsors: Kellogg’s, Science Bodyboards, Mike Stewart, Team Jamba and Pulp Surf,” said Skorge.
Stay tuned to the Hawaii Bodyboarding Facebook page for updates.