HALEIWA, Oahu/Hawaii (Sunday, October 29, 2017) — Hot off a runner up finish at the World Surf League (WSL) Pe‘ahi Challenge Big Wave event on Maui, Billy Kemper (HAW) returned home to Sunset Beach to further his competitive run at the Vans Presents the HIC Pro, where he won his Round 2 heat today. Champion of the HIC Pro in 2010 and multi-finalist throughout the years, Kemper looked solid in the 6-8+ foot surf on offer today despite a meniscus and MCL injury that he suffered on a 45+ft. wave at Pe‘ahi.

Up against an international mix in the last heat of Round 2, Kemper proved his Sunset prowess against Kade Matson (USA), Tristan Guilbaud (FRA) and Shun Murakami (JPN) for first place advancement. He takes this competition as seriously as any, and has worked incredibly hard this year in preparation for winter on the North Shore.

“Sunset is a beast of its own and you’re dealing with Mother Nature whether it’s two feet or 100 feet,” commented Kemper. “You can’t take it lightly, you have to have your preparation 100 percent and be ready for the worst outcome. I’m ready, I’m confident and I’m happy and healthy.”

With consistent surf on tap, competitors were treated to equal wave-scoring opportunities in the ideal conditions. 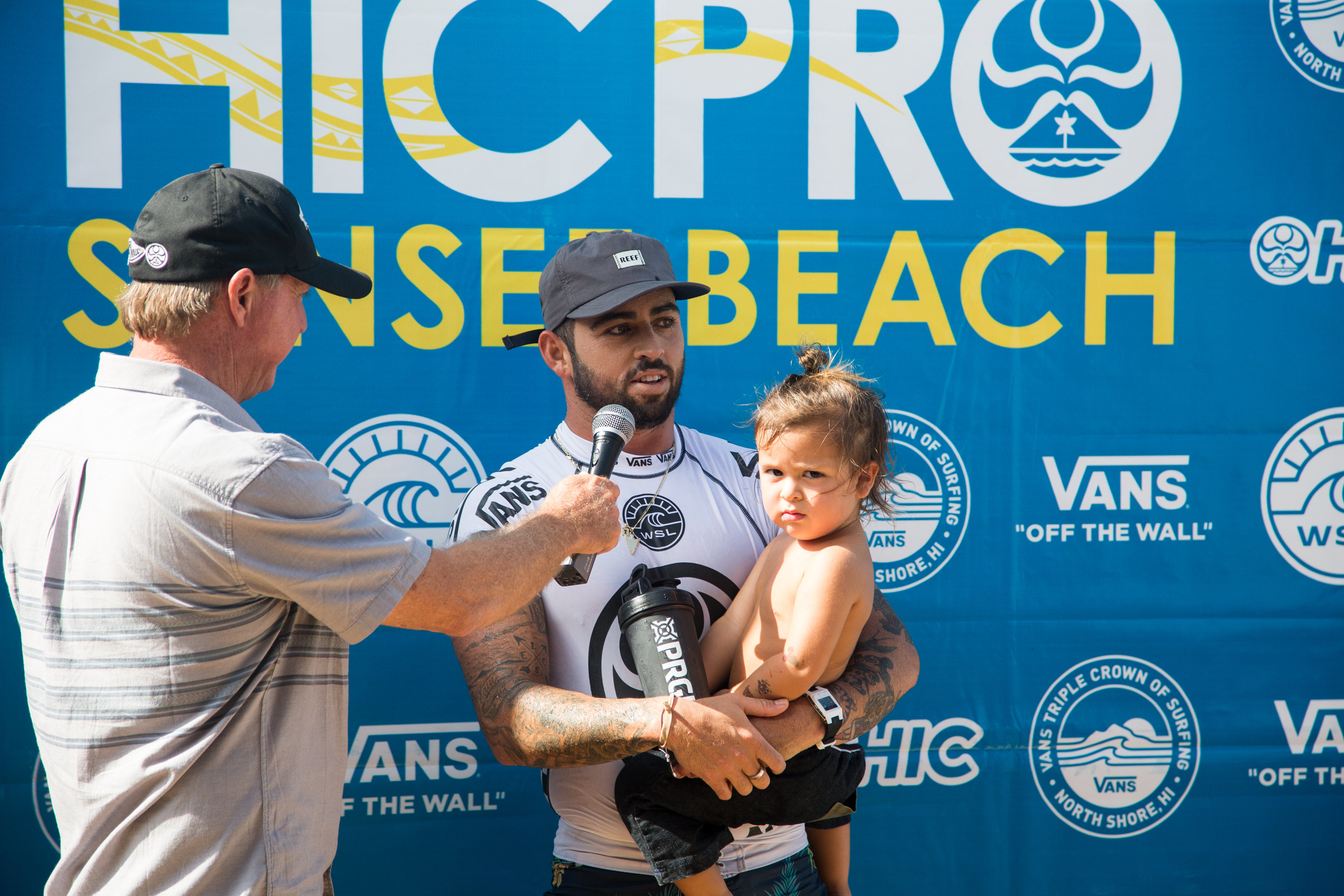 “It is definitely fun out there, it’s like skate park compared to Jaws,” continued Kemper. “But my adrenaline and my excitement are just as high as it would be surfing a heat at Jaws, so I take every heat the same and I’m just out there to win and have a good time and make it home safe to my family.”

A polished performance from Wade Carmichael (AUS) ended the day in dramatic fashion as the QS campaigner dropped a 9.67 in the final heat of the day, and the highest two-wave heat total of the competition, a 17.5. Winner of the 2015 Hawaiian Pro, Carmichael registers as a perennial threat on the North Shore and uses the HIC Pro to warm up for the Vans Triple Crown of Surfing.

“I usually do this event every year, just try to get used to your boards and get surfing really,” said Carmichael. “Sometimes you come over for Haleiwa and it’s flat and then it just goes boom, first swell and you’re straight into it, so it’s a good warm up and gets the confidence up.”

The Australian’s power surfing suited Sunset perfectly today and his 9.67 was awarded after multiple explosive maneuvers were dropped from take-off to finish.

“It was just a bomb set, a nice peak and I was just frothing,” commented Carmichael. “I didn’t really know what to do, I just wanted to surf and have some fun and I ended up getting three turns which is pretty rare for Sunset and it’s a good wave. I didn’t know what score it was going to be, I was stoked it was a 9.”

Wildcard Kalani David (HAW) made a comeback today after being out of competition for a year due to a heart condition. His strong performance today was a solid indicator that David is back in full force and eager to regain his place amongst Hawaii’s best, thanks to North Shore veteran Joel Centeio (HAW). Centeio, Hurley Surf Coach and advocate for Hawaii youth, handed his wildcard over to David in an act of selflessness and good faith. 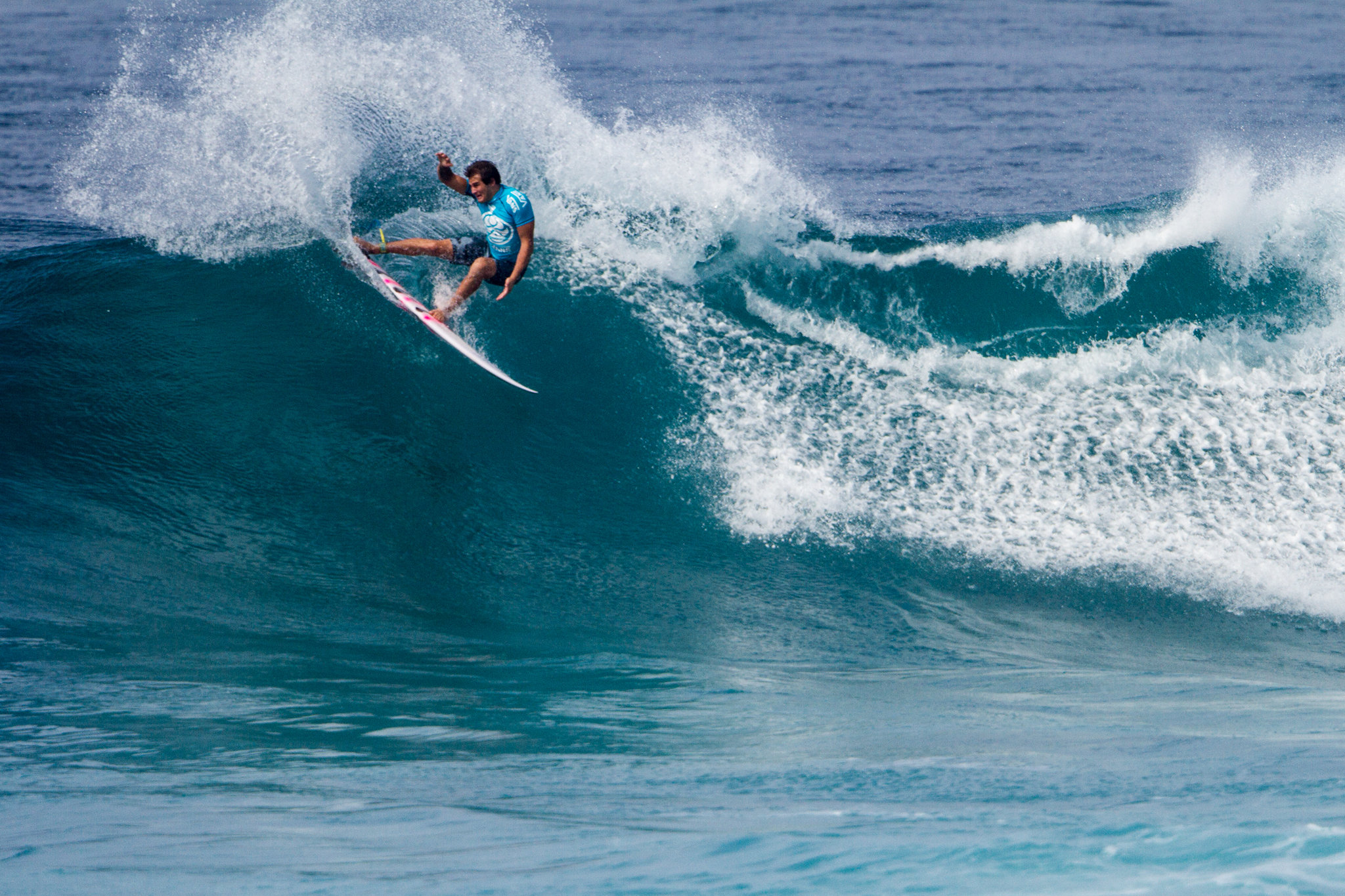 Kalani David took a commanding lead at the start of the heat and held it throughout for a first place finish. Image: WSL/Freesurf/Heff

“That was the biggest thing ever, I was just randomly at my house waxing up my board about to go surf and then I get a call… saying ‘yeah you got the wildcard, Joel (Centeio) decided to give it up and give it to you,’” said David. “Thank you Joel, you’re the man, you always have been my favorite surfer since day one so it’s pretty cool for you to give it to me and hopefully I do something with it.”

Margaret River’s Jack Robinson (AUS) had the second highest single wave score of the event, a 9.17 for a display of clean surfing on a set wave, combined with a committed finish in the critical section of the wave. 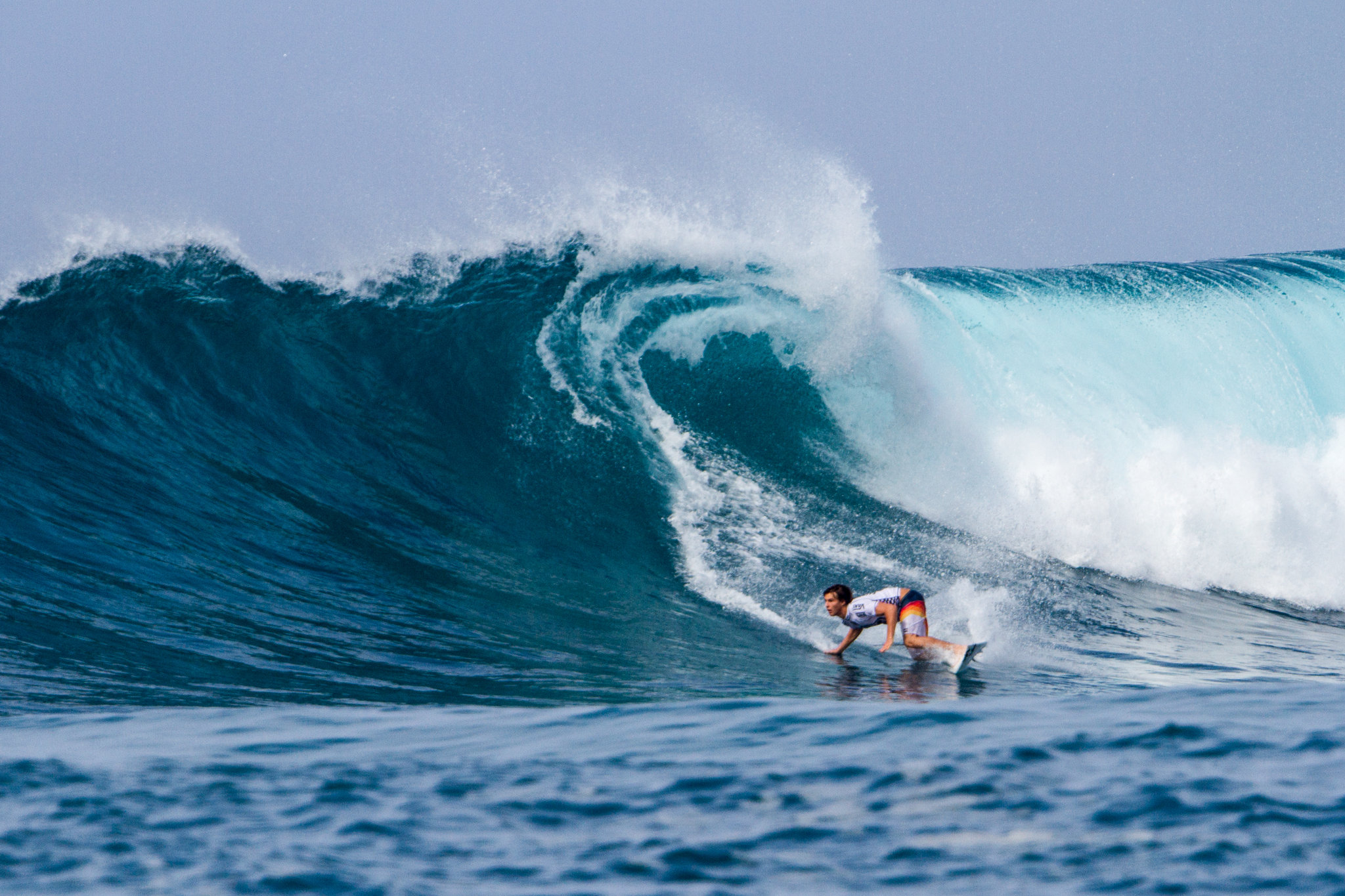 “I’ve done that a lot out there before, so when the right wave comes it doesn’t really matter, it’s just if it lines up I’m going to do it,” said Robinson. “I’m stoked, I didn’t know it was going to be this big so I’m just happy it’s real Sunset.” Robinson backed up his near-perfect ride with a 6.50 for calculated maneuvers and a small but clean barrel on the inside.

Championship Tour rookie and Honolulu native Ezekiel Lau narrowly made it through the heat behind Robinson to edge out young gun Wyatt McHale (HAW) and Maui’s Hank Gaskell. Lau showed his CT-level composure by nabbing the needed score in the final minute of the heat.

“I’m looking to put on some good performances,” commented Lau. “I’ve been having a lot of heats, especially on Tour, where I go through heats standing up once or twice and I just really want to get something going where I stand up three or four times a heat and get myself more opportunity to perform, so that’s my goal.”

The swell is forecast to decrease slightly through tonight and provide 4-6+ ft. tomorrow with similar conditions. Contest organizers says Thursday looks promising for the final day of competition, with a winner being crowned around 3:30pm.