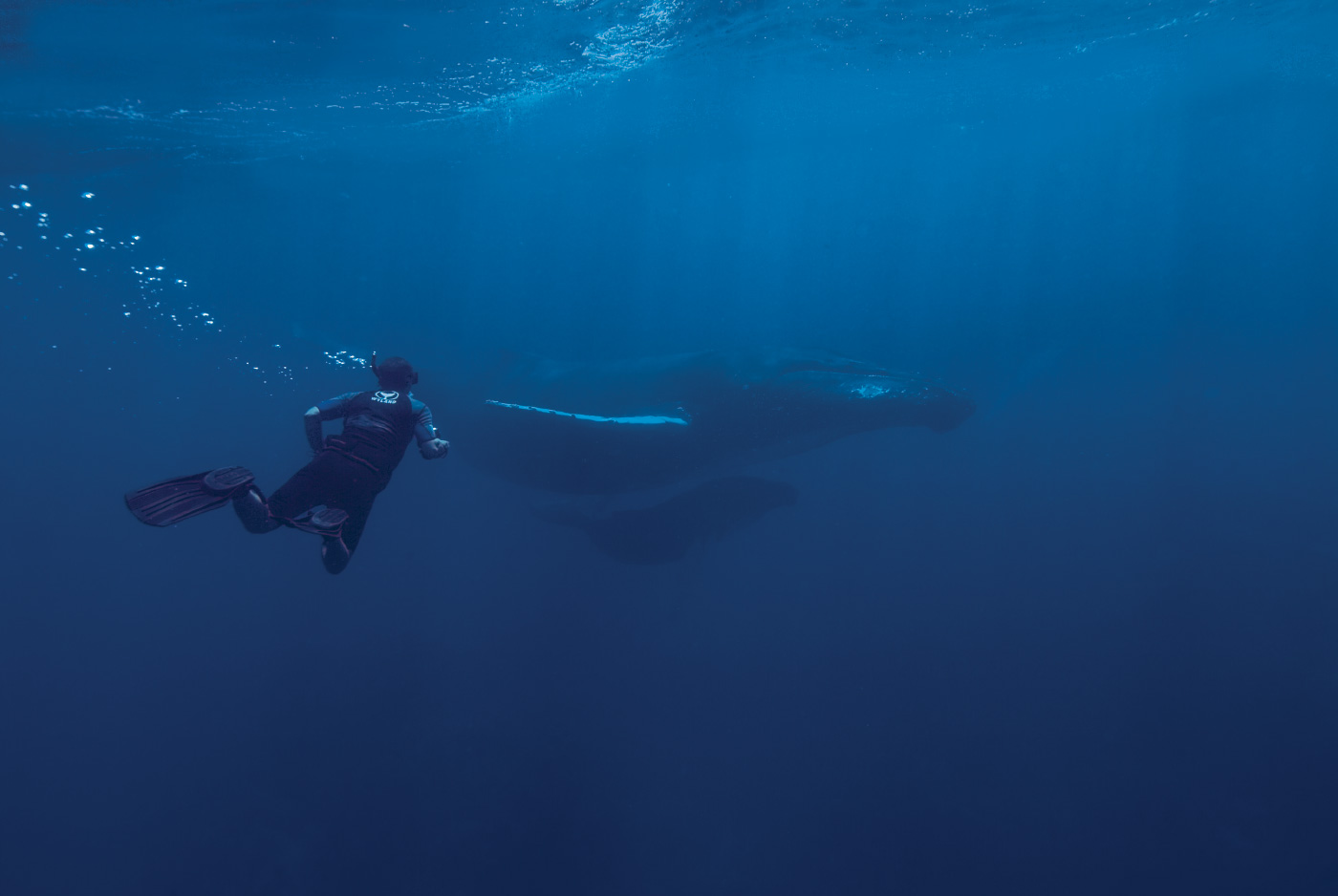 Catching up with Wyland

In the world of art and ocean awareness, no one man does it better or bigger than renowned artist Wyland.

This man, whose namesake headlines galleries around the world, unveiled the first of 100 “whaling walls” in Laguna Beach California in 1981, and it wasn’t on an oversized canvas. Instead, it was literally a whale sized pictorial on the side of a large building in the middle of the art-infused town. While the actual length and width were hundreds of feet, the impact and positive step for ocean awareness and conservation were immeasurable.

We had a chance to sit down with the esteemed artist, who values both art and conservation equally, at his home on the North Shore to find out more about what makes this man tick and what exciting projects we can expect from his creative mind in the future.

Talk us through why you decided to take on the unprecedented art endeavour of painting 100 murals in 100 different locations.

I’m at ocean person, but I grew up in Detroit far from the ocean. The ocean was the Great Lakes for me, you could actually body surf in Lake Michigan, but my dream was to go to California and be an artist. I was inspired by Jacque Cousteau, he inspired our generation. So when I was 14, we went to visit my aunt, piled into a car and I saw the Pacific. It was a dream. I dove underneath a wave, came up and a California Gray Whale breached right in front of me, it’s barnacle encrusted back breaking the surface. The whale tail flipped up, and it made such an enormous impact on my life and it continues to inspire me today. That whale was a sign that maybe the whale was going to be a focal point of my art. Why did you decide to paint murals instead of on canvases?

I was frustrated trying to paint a life size whale that I had seen onto a canvas. I needed larger canvases, so I started looking at the side of buildings. I felt if I could paint a whale life size, I could learn more about them, plus if I could paint it in a public place, people would become aware about the plight of whales. So I painted the first wall in 1981 in Laguna Beach, California of the very whale I saw 10 years earlier in 1971. What was cool was that those were the whales depicted life size in the first of what became a 100 ocean murals around the world featuring dolphins, turtles and sharks and other marine life. That was the first wall. At that point, I had so much fun doing the first mural that I decided I would paint 100 of them, and I did. That took me 27 years.

What reaction did you receive from the community?

After painting the first one, I saw the impact it had on the community. Schools were busing in kids to stand next to a life size whale, because how many people are actually going to experience something like that? Very few. Art is so powerful, and public art can be a world changer. When you paint art on that scale, people can’t ignore it. You can choose to not go into an art museum, but you can’t ignore a 200 foot mural of a life size whale. That was the simple philosophy that I had: bring the ocean to the cities.

Talk us through the political hoops you had to jump through in order to paint the first mural, because that couldn’t have been easy.

When I brought the concept of a 200-foot, life size mural featuring Gray Whales, the city of Laguna looked at me like I had 3 eyes. I told them my subjects are big, so I need a big canvas. It took 3 years of politicking. I needed permission and the person who owned the structure and the hotel, and after I received it, I started painting. Now, I could only rent the scaffolding for 30 days, so I had to paint it in 30 days. That’s all I had. I rented 3 scaffoldings, would run up and paint, run down and push and people felt sorry for me so they began to volunteer. That’s where the volunteer aspect came into play, and if you think about it, the story of how these murals are accomplished…it isn’t about me painting a great mural. The ‘Whaling Wall’ project is about how people came together to give a gift to their community. The art I do becomes part of the fabric of the community.

As an artist, what have been some of your biggest challenges?

The struggle is part of the fun. That’s how you really learn, the challenges you face. It’s how you deal with them. I remember when I was 19 and about to leave the nest, I was taking out the garbage and my neighbor said ‘I heard you’re moving to California’ and I said ‘that’s right’, and she said ‘you may be a good artist in Detroit but you’ll never make it in California.’ That could discourage any artist but I say let it be the fuel that drives you to be successful.

How do you define success in the art industry? Or any industry, for that matter?

Doing what you love. If you’re doing what you love, you’ve reached a pinnacle of success. Like I said, it’s important for me to pass on what I learn as I go through life and share it in a creative way.

You’ve traveled all over the world, and now you spend a lot of time on the North Shore. Why call the 7-mile stretch home?

Who hasn’t been inspired by the North Shore? Just don’t tell anyone, because we have too many people here. I was looking from my deck today and saw a whale breaching. Hawaii inspires, but Hawaii also teaches. It said to me that if you’re successful, you can give something back and I continue to try and do that.

Is there one specific mural or piece of art are you the most proud of?

My proudest thing is painting with kids wherever I go. At every Whaling Wall project, I invited the schools to bring the kids and I painted with them. I’ve painted with over a million kids in 100 countries and all 50 states, that’s what I’m most proud of. How did conservation come into the mix?

Well, unfortunately, the kids don’t know who Jacque Cousteau was. He instilled in the heart of our generation a passion for conservation. That’s what I try to do with my art. I use the success of my art to accomplish my vision of using art to not only educate but inspire action about protecting our ocean and our water. I realized that I had to be successful because I wasn’t getting a lot of support in the beginning. If I was successful, I could give back more, and I’ve always used that as my model.

What are your thoughts on the state of our planet?

The seas are becoming plastic, the water has been poisoned but there’s a lot of hope. Sylvia Earle said that we need to protect the heart of the planet, which is the ocean and so we need more protected areas. And that’s happening. It’s not happening fast enough for Silvia or myself, but it is happening. So people are beginning to take actions that are ensuring that our future looks brighter. Right now, we’re destroying it faster than we could protect it. But the good news is that the children are aware, taking action and doing good positive things. When you plant the conservation ideas in the minds and hearts of children through art, that’s the best investment you’ll make because it bears fruit. I see the kids I painted with 30 years ago and they tell me ‘I’m a marine scientist’ or ‘I’m working with NOAA’ or forest service. I did have an impact on those generations, and that’s the real spirit of who I am and what I try and do with my art.

Give us some practical solutions that the everyday person can take to me more conservation minded.

Forget about our generation. Put everything we have into the next generation. Kids have open minds and open hearts. If you want to protect environment today, talk to my generation but if you want to protect it for the future, talk to the kids. The specifics, for me it’s all about water. Right now the Wyland Foundation has developed the World Water Pledge, where we’re encouraging 7 billion people to be water wise and to learn how you can save water. We have plenty of it, but we aren’t taking care of it, and we need to be better stewards. The water we have here has been here since the dinosaurs, we don’t get any more. It’s very empowering when you learn how to shut off the faucet when you’re brushing your teeth. It’s a little thing, but it adds up. By saving water you’re saving energy, money and the planet. Water is the most important issue of our day and will be for the next 100 years.
What can expect from you in the near future, as an artist and on a personal level?

I think that I’ve had a great run, but I’m just getting warmed up. I’m going to do 100 monumental sculptures in 100 cities in the world in the next 25 years. Ten of those will be underwater too. I want to create larger than life sculptures of animals from the red list, the endangered and threatened species. You may be driving down the highway and see a paddlefish made of maybe stainless steel and it will cause you to look at these animals differently. I think art will play one of the most important roles in the conservation of our blue planet and I’m going to be right there on the front lines encouraging the artists that come behind me.