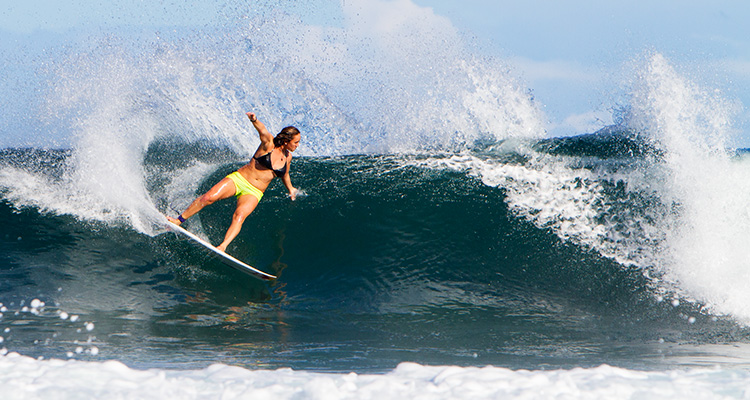 Ceremony to Induct Carissa Moore Into Surfing Hall of Fame

In the middle of an exciting world title chase, 2014 Surfers’ Hall of Fame inductee Carissa Moore will have a special ceremony held in her honor on Friday, July 25 at 10 a.m.  The tentative schedule for the Vans U.S. Open of Surfing, an ASP Women’s World Tour event, shows Carissa paddling out for a heat at the time she would be inducted, hence the “early” ceremony one week prior to the more traditional event.  Bob Hurley, founder of Hurley, will be presenting the Surfers’ Hall of Fame Trophy to Carissa Moore and speaking at the July 25 ceremony.

Timmy Turner and Rusty Preisendorfer, this year’s other inductees, will be honored on Friday, August 1st as originally scheduled.  Rick “Rockin’ Fig” Fignetti will emcee the main event while Huntington Beach Mayor Matthew Harper will provide a special welcome to attendees.  It is anticipated that a dignitary will speak on Carissa Moore’s behalf.

“We are stoked and excited to honor Carissa Moore at this year’s Surfers’ Hall of Fame,” said Aaron Pai.  “Carissa is battling for another world title and we wanted to ensure that she could enjoy her own induction ceremony along with family, friends and sponsors without worrying about rushing off to the competition.  We’re pleased that she is able to join us on Friday, July 25 for a special ceremony in her honor.”

Carissa was born in 1992 in Honolulu and began riding waves with her father at age five.  In 2004 the 12 year-old began a remarkable competitive run, winning the first of four National Scholastic Surfing Association “open division” women’s titles.  She became the most decorated surfer in NSSA history with 11 national titles.

By 2009 Moore had signed lucrative endorsement deals with Nike and Target, reportedly becoming the highest paid female surfer in the world.  She finished third on the World Tour in 2010, won the largest purse in history ($50,000 at the U.S. Open) and was named Rookie of the Year.  The following year Carissa made the finals of all six and won three of the World Tour events, dispatching four-time world champion Stephanie Gilmore on her way to the title.

Following a disappointing 2012, Moore stormed back in 2013 winning four and finishing in the top five of all eight events to secure her second world crown.  Her torrid pace continues this year where she’s already won two events and currently sits atop the leader board in the world title race.

“Carissa Moore may be one of the most gifted athletes to ever set foot on a surfboard,” said Bob Hurley.  “It was obvious, when she was only 9 years old, that she had potential to revolutionize women’s surfing.  While her fiercely competitive nature will likely lead her to more world titles….  The important thing to know is that Carissa is gifted with a heart of gold.  A  magical smile that lights up the room, and unique ability to make others feel much more important than herself.”

The Surfers’ Hall of Fame induction ceremony is open to the public, free-of-charge.