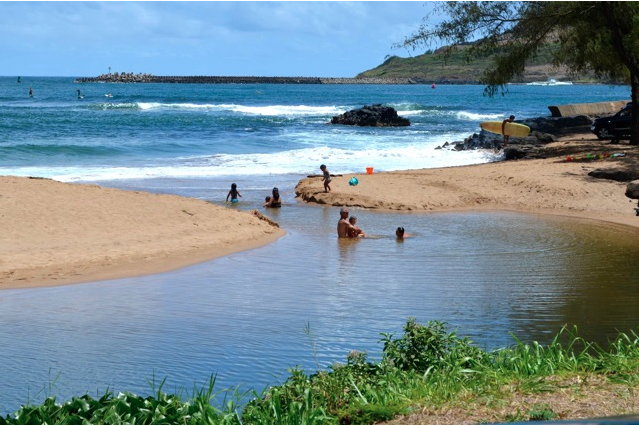 According to the Surfrider Foundation, several Kauai streams have been tested positive for contamination especially in along the Waiopili stream. A letter from Surfrider Foundation about this issue has been sent to the Department of Health and is looking for cooperation to put up warning signs along the streams in which the has been no co-operation from the department. Here is the letter from Surfrider to Department of Health:

The Department of Health has not taken appropriate action in response to post warning signs at the beach parks. Surfrider recently released its annual water quality report that shows continuing pollution problems in Kauai’s coastal waters, yet it was again ignored by HDOH.

For the last seven years, the Kaua’i Chapter’s Blue Water Task Force, a volunteer-led water quality program, has tested over 25 surf breaks, streams and estuaries on a monthly basis. Data indicate that bacteria levels in many island streams are 10-100 times greater than the acceptable limit set by the state and EPA to protect public health in recreational waters. Four streams fail to meet health standards every single time they are tested, and five others have failed over 80% of the time.  This is particularly disturbing because these are the same streams where families and children commonly choose to swim and play.

Of major concern, the Waiopili Stream in Kaua’i has failed to meet state water quality criteria every time Surfrider has tested it.  The latest bacteria test result obtained on March 12, 2016 was nearly 120 times greater than the health standard.  The statistics are more than alarming — this is a dangerous public health situation.  Other highly contaminated areas include:  Waikomo Stream at Koloa Landing, Niumalu Beach Bark and Hanamaulu Stream at the Beach Park and Nawiliwili Stream at Kalapaki Bay.

“Unfortunately the families and children who love to play in these polluted streams as they flow across the beach don’t know to stay out. Why?  Because the Hawai’i State Department of Health refuses to post warning signs,” said Dr. Carl Berg, the Surfrider Foundation’s Blue Water Task Force coordinator in Kauai and former Environmental Health Specialist for HDOH. “I’ve made several pleas to the Department of Health leadership and each time they have dismissed our data without taking any significant action to address this public health risk.”

According to guidance provided by the EPA, HDOH is required to notify the public when bacteria levels exceed or are expected to exceed state determined, and federally recommended, water quality criteria.  HDOH only posts warning signs of high bacteria levels at the beach when there is a known human source of the contamination, such as a sewage spill or culpable cesspool.  Otherwise, they do nothing, letting people unknowingly venture into potentially polluted water and risk getting sick with stomach and digestion ailments, flu-like symptoms, hard-to-treat skin infections, or something worse.

Surfrider calls on the Hawai’i Department of Health to do the right thing: acknowledge the citizen-science data presented, take immediate steps to protect public health by posting warning signs along all polluted coastal waters, conduct a serious investigation into the sources of pollution, and ultimately start fixing the problems. Find out which beaches test clean before you go into the water on Surfrider’s Blue Water Task Force website.