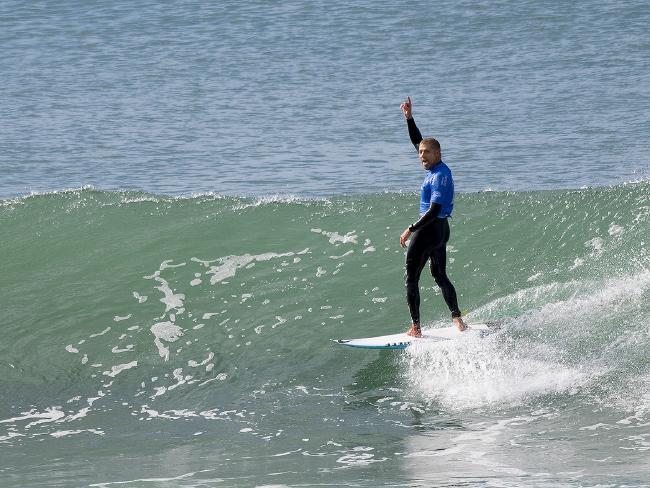 By Mike Latronic
Final day of the JBay event featured flawless if not sizable surf waves in the 2-4 foot range, corduroying down the infamous JBay point. The stage was set for a big day of point exchanges along with the most talented surfing on the planet.
As I watched these heats unfold, I was absolutely convinced that there were huge dividends paid for top physical conditioning psychological training and heat strategy.
Case in point: Mr. John John Florence.
Abandoning his “free surfing” approach to heat surfing and replacing it with solid tactical strategy, he simply surfed freely. The training has added strength and consistency to his creative attack. This wasn’t so apparent in the semis, a lackluster heat with Jordy Smith but definitely showed itself later as John John carved snapped and launched his way to the finals.
Mick Fanning – the model gladiator surfer! The man is Bruce Lee on a surfboard and already nearing supposed retirement looks to be holding up his namesake “lightning” every bit as much as he did 10 or even 20 years ago.
Unfortunately for Felipe Toledo, who had an absolutely stellar quarterfinal and may have advanced in any of the other three quarterfinals perhaps, Mick took the young one out.
Slater shined to the quarters, casually working his way a few notches up the ratings but not quite where he wanted to be literally in his quarterfinal heat against Josh Kerr.  Admittedly “showing up five minutes late”, Slater’s magic rhythm lost to inconsistent surf and a crafty and well disciplined Kerr.
Slick and I’ll just say it – beautiful – Julian Wilson disposed of Gabriel Medina. Medina was certainly no pushover and didn’t seem to have the opportunities he normally gets to get into the excellent range more often than not.
Fanning and Wilson were to meet up in the semifinals at JBay. The sparks flashing and sprays flying certainly washed away a lot of the tension. Not a word was mentioned online during the heat but we all both remember the bravery of both these fine men from last year’s incident.
A John John Florence and Mick Fanning final? Sounds good to me.
This was John John’s first final at J Bay and this was Mick’s fourth in a row. We all wish the waves were firing 4-6 feet to see what would result. John John put on a great show but Mick was not to be undone. As I said earlier, Mick is going to put a real wrench in the world title race even if he only does select events.