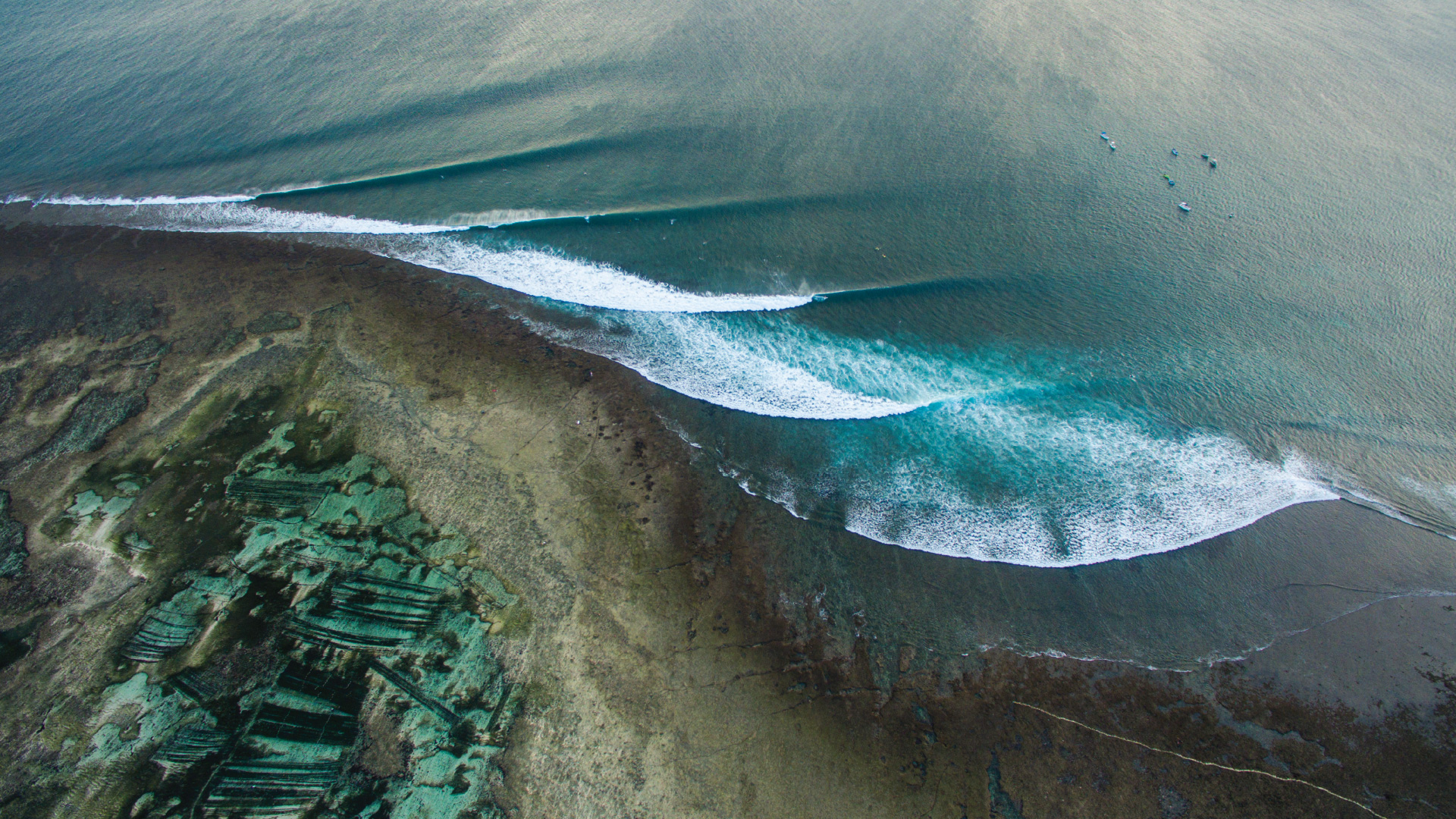 When you get invited to venture to lesser known region of Indonesia, you go. Whether you’ve been to Indonesia or not, the thoughts of warm, blue, ruler-edged waves can get even the most novice surfer excited. And that’s exactly what the island of Rote, found at the southeastern end of Indonesia, offered. In early June, Maui surfers Imai Devault, Cody Young, Ola and Monyca Eleogram, Big Island bodyboarder Will Petrovic, and Florida grom Robbie McCormick embarked on a 10-day stay at Nemberala Beach Resort on the western coast of Palau Rote.

The small island off the coast of Timor boasts a free range lifestyle, where the farm animals are just as abundant as waves. Nestled just over 300 miles northeast of Australia, a steady offshore breeze grooms the region’s most popular wave, the long rippable left hand walls of T-Land. But beyond that lies a number of less crowded high performance surf spots. And with a little ambition, a boat or scooter and some luck, the crew scored waves just around the corner better than they could have ever imagined. In order to get to Bali, which is minimum two flights from Hawaii or the mainland USA, an overnight in Bali is typical, followed by an inter-island flight to Kupang, West Timor. From there, it’s either a ferry ride or small commuter plane to Rote, and then an hour and a half drive to Nemberala in West Rote.

“Getting here is definitely a mission from Hawaii,” Monyca told me, “but Ola and I did it pretty sweet because we spent time in Japan first, and then Bali so we broke up the trip. If I had friends coming here, I’d recommend doing that, breaking it up and checking out a few places along the way.”

As was to be expected, there were some hitches. Our boards weren’t able to fit on the commuter flight, meaning the first afternoon was a lay day since the boards weren’t going to be delivered until the next day. Everyone spent the time getting settled in and comfortable at Nemberala Beach Resort (NBR), which would be our home for the next 10 days.

“I’m looking forward to getting good waves, hopefully some barrels, but mostly looking forward to surfing with my friends and making new friends,” Cody told me as we discussed the swell. “Hopefully we can score waves that we’ve never heard of or seen videos of.”

Boards arrived, but the swell was still on the way. We took a mellow start to the day, enjoying the breakfast service from NBR’s friendly local staff and waited for the afternoon session when the swell would start to fill in. We kept it simple and surfed out front at the region’s most popular wave, T-Land. The long left hander was playful and the steady offshore winds kept it nice and groomed. All in all, it was a good warm up session for everyone to get their feet in the wax. Anticipation continued to build for the forthcoming swell.

“I’ve been to Indo 6 times, but this is my first time here to Rote,” Imai said when we talked about the remote locale. “I didn’t know what to really expect because I’ve never really heard much about this place. This setup is super cool with the bungalows on the beach, a pool and a bar, and T-Land. Plus, we have those boats, so we can jet off to any spot we want to go to.”

On a trip stacked with regular footers, a right hander is always a premium. With NBR manager Greg’s recommendations, we headed out on the 10 minute boat trek to surf Sucky Mamas, a right that held potential. Unfortunately, the tide was filling in too quick and the session was cut short. We realized that tides are a huge factor in Indo and timing the spots on the right tide would prove to be key.

For the afternoon session, hitting the incoming tide before it filled in too much, we headed to the southwestern tip of the island to sample another right hander, Boa, the soon to be site of another resort. The steady offshore wind was more of a side-shore angle for Boa, which meant air wind and the punts ensued like clockwork.

Boa was once again on the mind and with the swell completely filled in, it was on for the morning session. We arrived just in time to see an overhead set rifling down the reef with multiple lines out the back and nobody out. We couldn’t get on it any quicker and a marathon session went down with barrels, airs and cracks.

“That was super fun,” Cody said after the surf. “We pulled up and saw like 3 or 4 of the biggest barrels, they were just reeling across the reef. We got out there and had a really fun session. Bunch of big turns, some barrels, some air sections, everything.”

“We saw a wave barrel for 30 seconds, I couldn’t believe it!” Willy said. “That wave is a rifle, it’s pretty sick.”

Once back at NBR, it was lunch time followed by a siesta. The tide was high and while T-Land was still breaking, we knew the afternoon session would be better. And it was! Long 6-foot walls roped down the reef and the backside repertoire was on show. A good day of surfing, lots of waves, lots of sun, and lots of smiles. The evening Bintang never tasted so good.

The swell was on the decline, but once again Boa was the call. We just couldn’t get enough of the right hander!

“Boa’s sick,” Robbie said. “It’s like a barrel with an air section of a wave. It’s just such a long reef…it’s super fun.”

When the conditions deteriorated later on, we went back to relax. Massages were booked, smoothies were ordered and vacation mode was in full effect. There’s no shortage of relaxing amenities at NBR.

As the sun lowered in the sky, T-Land was looking more and more fun and Monyca decided she would go out and get some sunset laps in.

Day 6: From Petrol Bombs to the Sandbar

It was time to surf a new break, and we were all excited to find something a little hollower. Greg directed us to Petrol Bombs, an outside peak that barreled onto a shallow fringe reef. The swell was 3-4 foot and little drainers were on offer. Of course Ola was the tube hound, racking up shade with ease, and everyone else got a few as well. In the afternoon, the ultra low tide meant the nearby sandbar would be shallow enough to break with little rollers, so we took a handful of the local kids out for some push-ins. Needless to say, they were stoked! And the smiles were contagious for us all.

“Hanging out with the kids on the sandbar was definitely a highlight for me,” Monyca said. “Communication was limited with the language barrier, but it didn’t hinder the emotion we felt from each other. It was fun to help them and have that connection with the local kids.”

We hit up Petrols again, our new favorite wave on Rote, and had some fun before trolling on the way back. Cody carried the luck with him and hooked up with a nice size Aku fish. After a cruisy afternoon, with more smoothies and massages, the NBR staff sliced up Cody’s fish for some tasty sashimi pupus before dinner. The service at the resort is unreal, three meals a day, full bar, massages on order and lots of lounge furniture to kick back on and stare at the T-land lines rolling down the reef out front. Truly a surfer’s paradise.

The swell was back! We were all eager to see what Petrol Bombs would do with some proper waves hitting the lineup. And there certainly were some bombs exploding! We hit it on the low end of the tide, knowing that it would get better as it filled in. It was a little shallow to begin with and Ola found this out quickly, getting up close and personal leaving some skin on the reef, but as expected, it got better and better and better. While everyone got a few memorable ones, once again Ola locked into the best barrel, driving through two long heaving sections and coming out with casual style.

“That was pretty intense at first,” Ola told me afterwards. “It’s slabbing on this dry reef, the shelf is just like gurgling everywhere. On my first one, I pulled in and thought it was going to be a perfect one and it pinched on me, throwing me onto the reef. I whacked my elbow and my knee, but I shook it off and stayed out there. Later, I broke my leash, stayed in the lineup and got some of my better waves, 3 in row that were just so good, just draining barrels.”

“That was a highlight session, the waves were 6 feet, a couple 8 footers,” Willy said with a smile. “I got washed in, pretty annihilated, but it was definitely worth it, super fun.”

After the sun sank below the horizon, Greg arranged a local dance group to perform in native attire and it was cool to get a sense of the Rote culture.

It was nearing the end of the trip and everyone was happy with the waves we had scored. We took most of the day to relax, cruise around the western end of the island and soak in the local vibe. Rote is about as mellow as it gets, with free-range farm animals roaming everywhere, coconut trees swaying and locals smiling everywhere you go. In the afternoon, we surfed out front at T-Land, just because. You can only stare at symmetrically breaking waves so long before getting the urge to paddle out. The swell was on the decline again, but it was fun to wash off the day with a surf.

“T-Land is such a fun, rippable left,” Imai said post surf. “We’ve gotten it head high, we’ve gotten it double overhead. And at low or high tide, you can surf it.”

Day 10: Reflecting on T-Land, Boa, Petrols and everything in between

On our last full day on Rote, the surf was down, but not flat. There were still some waves to be found and after a lazy day of hanging out and decompressing from all the sessions prior, we all decided to surf one more time. The afternoon session at Boa was a nice end to the trip. We got rights, lefts, rippable walls, barrels, air sections and virtually no crowd at every spot except T-Land.

During our last dinner, we reflected on the highlights of the trip: the 10 turns Cody did on one wave, that tweaked rotation Imai pulled, Willy’s spot way up the reef at T-Land, Robbie’s crazy antics, Monyca’s evening flare out front, and of course Ola’s nug at Petrols. We all wondered if we would come back, or more likely when.