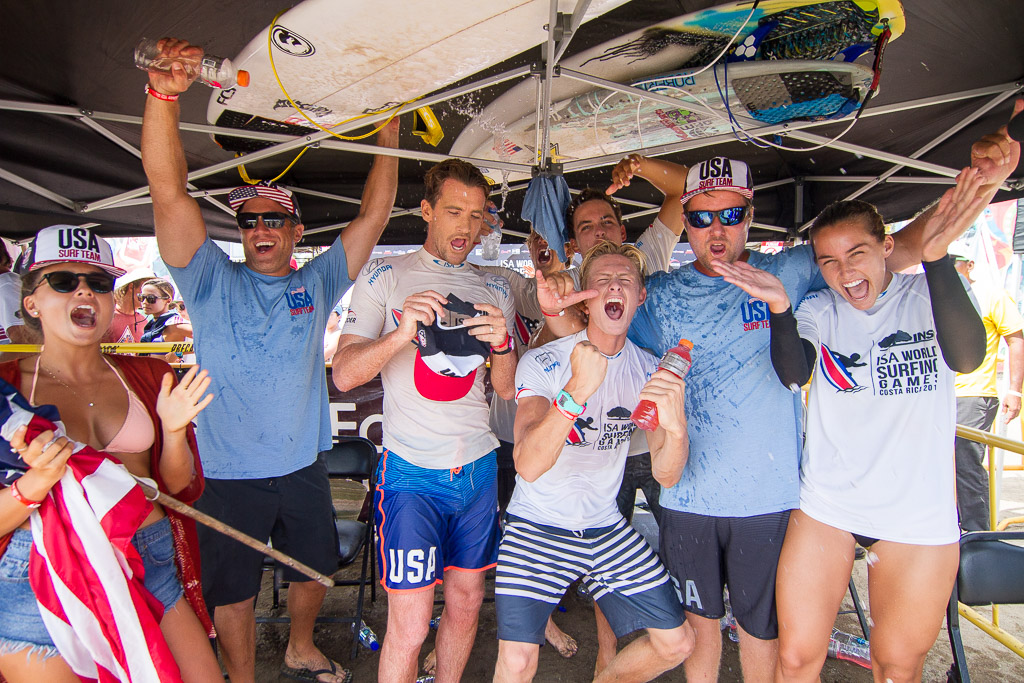 The first Medal of the competition was awarded in the afternoon in front of a boisterous crowd as USA emerged victorious in the Final of the ISA Aloha Cup. Team Argentina earned the Silver Medal, Team Costa Rica the Bronze Medal and Team New Zealand the Copper Medal.

“What an amazing ISA Aloha Cup Final! Team USA has won the first Gold Medal of the 2016 INS ISA World Surfing Games and the first in the era of Olympic Surfing.

“The energy on the beach was amazing while I watched on the webcast, just a dose of what we will experience tomorrow when the individual and Team Gold Medals are awarded.”

The penultimate day of competition commenced with two heats of Open Men Repechage Round 7. In the opening heat Japanese teammates, Takumi Nakamura (13.46) and Hiroto Arai (16.26), eliminated the local fan favorite Carlos Muñoz from the competition, after he was only able to put together a heat total of 12.50.

The Open Men Round 5 and Open Women Round 4 of the Main Event followed, setting up the Finals heats for the Men and Women. Francisco Bellorin (VEN), Pedro Henrique (POR), Guilherme Fonseca (POR) and Noe Mar McGonagle (CRC) finished in the top two spots in the Open Men’s Semifinal heats and will compete in the Final on Sunday morning.

On the Women’s side of the competition Tia Blanco (USA), Dominic Barona (ECU), Teresa Bonvalot (POR) and Justine Dupont (FRA) continued their campaigns in the Main Event, where they will compete in the Final on Sunday.

The winners of the Main Event Final will move on to the Grand Final, where they will face off against the top two athletes of the Repechage Final.

The action ensued with the Quarterfinals and Semifinals of the Open Men and Open Women Repechage Rounds as Playa Jacó filled with tens of thousands of spectators to watch the crucial elimination rounds.

Peru’s Lucca Mesinas and Argentina’s Leandro Usuna, the 2014 Men’s Gold Medalist, energized crowd and advanced to the Final, where they await the losers of the Main Event Final.

To cap off the excitement on Day 7, the ISA Aloha Cup gave the crowd a taste of the ISA’s unique tag team relay event. The ISA Aloha Cup features the top eight teams from the 2015 ISA World Surfing Games, with each team fielding four male surfers and one female, summing up three waves of each to get the teams’ total score.

Team USA jumped out to an early lead in Final and never looked back. They were closely trailed by Team Argentina, but USA’s team total of 73.49 was not overcome by Argentina’s total of 66.64. Costa Rica and New Zealand finished third and fourth respectively, with scores of 60.81 and 56.28.

“It’s such an honor to win the first Gold Medal of the event and to represent the USA. Teamwork was the most important thing. We are all so close and connected so it’s definitely a blessing to have them all here.

“We will be cheering on Tia (Blanco) as she goes into the Final tomorrow!”

Surfline, the official forecaster, is predicting a new 3-5 foot Southwest swell to fill in on Finals Day, showing more size throughout the afternoon.

The full Surfline Forecast can be found here: http://isaworlds.com/wsg/2016/en/forecast/

View the full results from Day 6 of competition here: http://isaworlds.com/wsg/2016/en/results/