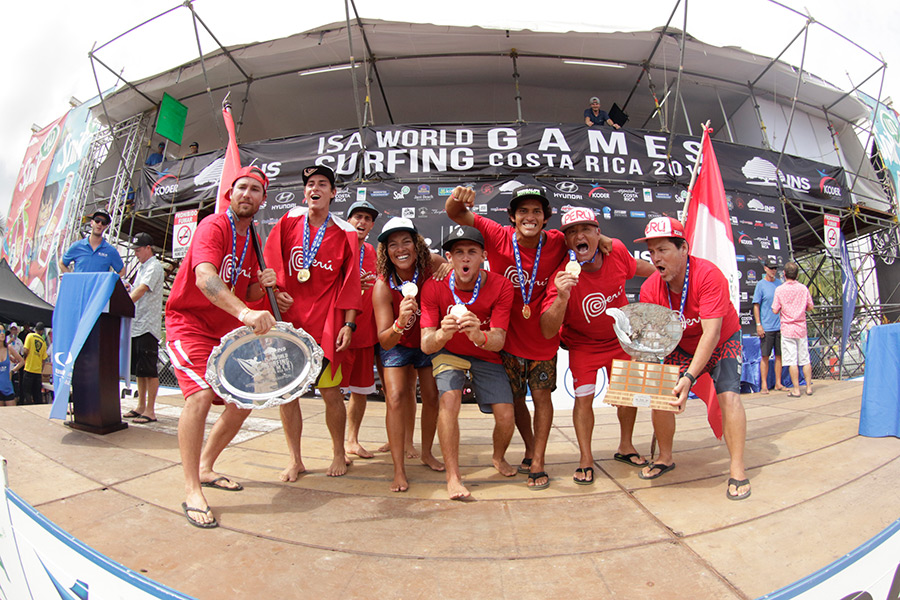 After eight days of world-class Surfing competition at the 2016 INS ISA World Surfing Games in Playa Jacó, Costa Rica, Team Peru has emerged victorious and earned the Team Gold Medal and coveted Fernando Aguerre World Team Trophy. The Gold Medal was the second for Team Peru in three years, having won the Team Gold Medal at the 2014 ISA World Surfing Games in Peru. Rounding out the Team Medal was Team Portugal with the Silver Medal, Team USA with the Bronze Medal and Team France with the Copper Medal.

ISA President, Fernando Aguerre, expressed his excitement after watching the Finals on the webcast, unable to attend in person due to a back injury:

“Congratulations to the Team Gold Medalist, Team Peru, and the individual Gold Medalists Tia Blanco and Leandro Usuna. Tia and Leandro will forever be the very first ISA gold medalists of the Olympic Surfing cycle. As all the other ISA competitors, they surfed in true Olympic spirit, for the honor of representing their countries.

“Twenty-seven nations came together from around the world to surf in this history-making ISA World Surfing Games, for a phenomenal week of surfing and team camaraderie. Since 1964, the ISA has been the global surfing stage for all the surfing nations. And this event has been the very first one after the IOC inclusion of Surfing into the Tokyo 2020 Olympic Games. Now all surfers in the world, have the chance of becoming Olympians, the first ever Olympic surfers”.

After a morning that featured the Men and Women Main Event and Repechage Finals, the Open Women Grand Final took to the water in front of thousands at Playa Jacó. USA’s Tia Blanco found her rhythm midway through the Final and found a pair of rides in the 7-point range that gave her a heat total of 14.72. Blanco’s score proved to be just enough to win, as Ecuador’s Dominic Barona (14.67) earned the Silver, France’s Pauline Ado (14.46) earned the Bronze and France’s Justine Dupont (12.33) earned the Copper.

“I’m over the moon right now! It couldn’t get any better for me. I’ve had a little bit of a rough year so I’m super happy to get this title. I love to represent the USA and so excited to make every one proud at home.”

The Open Men Grand Final finished off the day, where Leandro “Lele” Usuna the 2014 Gold Medalist in Peru, won his second ISA World Surfing Games Gold Medal with a score of 14.33. Peru’s Lucca Mesinas (12.57) finished with the Silver Medal, Costa Rica’s Noe Mar McGonagle, the 2015 Gold Medalist, with the Bronze Medal and Venezuela’s Francisco Bellorin (9.67) with the Copper Medal.

“I’m two-time champion, I can’t believe it! This is the third consecutive Final I’ve made in the past three years. I do this for my country, for my family and everybody who is always there for me. This isn’t about points or money, this is about love for your country and raising your flag. I’m just so happy!”

Team Peru had remained among the top of the Team Rankings through the entirety of the competition, trading off the top spot multiple times with Portugal, Costa Rica and France. Their stellar overall team performance proved to be the key to their success, spearheaded by Lucca Mesinas’ individual Silver Medal.

“Unfortunately I couldn’t win my category division, but when I heard that Peru was the ISA World Champion, there were no words to describe it! I’m very happy that Peru finished as champion here in Costa Rica.”