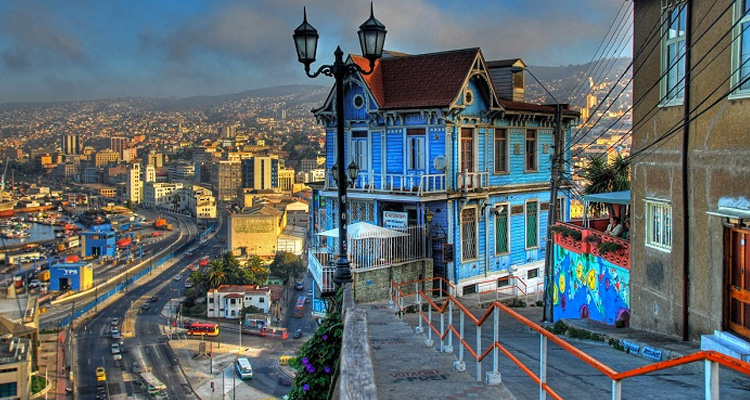 The Race for Water Odyssey is making a stopover in Chile

After a spectacular route through the Panama Canal, the Race for Water Odyssey (R4WO) entered into the Pacific Ocean, and arrived this weekend in Valparaiso. The R4WO will stay in the Chilean city until 18th May, before beginning the second phase of scientific analyses in the South Pacific Ocean waste vortex.
After 20 days of sailing, from New York and a short stopover in the British Virgin Islands – to take part in a seminar organised by Virgin Unite – the R4WO drew alongside Valparaiso at the Chilean Sea port. For several days, the R4WO will take part in numerous actions to raise awareness about the ocean pollution issue, with the support of the Swiss Embassy in Chile, as the Ambassador, Edgar Dörig explains:
“Despite the fact of being a State with no direct access to the sea, Switzerland has a great interest in the conservation of oceans, which cover 71% of the surface of our planet. The Swiss Embassy in Santiago de Chile is convinced of the importance of the Race for Water Odyssey project and is proud to support it by welcoming the team to Chile and by supporting them in the organisation of several important events.”
These activities will take place in the port city as well as in the capital, Santiago de Chile. The expedition will be, amongst others, presented to the National Chilean Congress, withPablo Badenier, Environment Minister.
The R4WO crew will also take part in awareness-creating activities with children and a thousand students from the Naval Polytechnic Academy of Valparaiso with the aim of highlighting the disastrous consequences of plastic pollution on marine and land ecosystems.
Second phase of scientific analyses in the South Pacific waste gyre
As of May 18th, the R4WO will set off to Easter Island, then to Palmyra Atoll and will continue its scientific surveys on the beaches of these islands which are victims of the surrounding ocean plastic pollution. These islands are located within the South Pacific waste gyre less-known than its counterpart in the North Pacific. Frédéric Sciacca, Scientific Supervisor of the project, explains why the R4WO has decided to go there:
“This gyre is indeed less widely known than the other 4 main waste vortexes, particularly because of its distance from the coasts.  Consequently, we only have a small amount of scientific data about it. However, its stretch appears to be very significant, according to the models. Therefore, it seems crucial to us that the R4WO goes to the coastlines affected by this waste gyre, like Easter Island, in order report on the situation and carry out scientific sampling there.”
The selected beaches will be studied following the same protocol that has been used during the first phase of analyses in the Atlantic (in the Azores and in Bermuda) in order to get a comparable set of data.  At the same time, the expedition team will continue to meet local populations (NGOs, authorities, fishing associations etc…) to collect testimonies about the actions they take against plastic pollution. After these first two scientific stopovers in the Pacific, the R4WO will then stop in Hawaii for a new awareness-creating port of call.
For more information on the stop-over programme: http://www.raceforwater.com/steps/valparaiso-city
To follow the expedition on live: http://www.raceforwater.com/race_for_water_odyssey/map
About the Race for Water Odyssey (R4WO)
Initiated by the Race for Water foundation, the “Race for Water Odyssey” is a unique expedition that aims to draw up the first global assessment of plastic pollution in the ocean by visiting island beaches situated in the 5 trash vortexes. In less than 300 days, over 40,000 nautical miles will be traveled, punctuated by 11 scientific stopovers and 9 outreach stopovers, involving a total of 13 countries. The Race for Water Odyssey benefits from the support of ISAF, Duke University, Oregon State University, senseFly, Swisscom and Swissnex.
About the Race for Water Foundation
Founded in Lausanne in 2010, the “Race for Water” Foundation’s mission is to preserve our planet’s most valuable resource: water. The foundation is an officially recognized non-profit organization seeking to implement concrete and sustainable actions, focusing on two main themes: protecting oceans and freshwater. “Race for Water” initiates projects aimed at raising awareness and taking concrete action on the ground. These actions are directed at four target audiences: economic players, political bodies, the scientific community, and the general public—with particular emphasis on future generations. “Race for Water” collaborates with organizations such as UNESCO, UNEP, IUCN, WWF, and WBCSD.