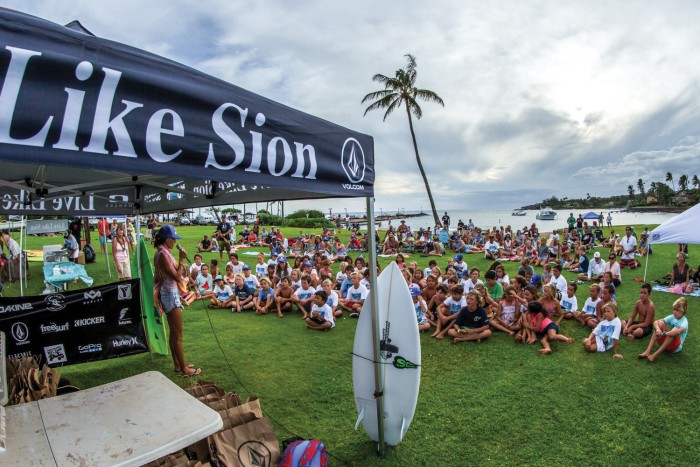 Keiki converged at PK’s beach on the South side of Kauai to join in on the 4th annual LIVE LIKE SION Gromfest. Sion Milosky was well known in the surfing community not only for his respect and love for surfing, but also for passing the sport on to future generations. This memorial contest carries on that tradition, which was so very important to him.

With partly cloudy skies, light offshore winds and pumping waves thanks to the remnants of hurricane Hilda, conditions were perfect. Kids 16 and under and from all over the island entered the contest to showcase the up-and-coming surf talent on Kauai. The first heat hit the water around 7am with various heats continuing throughout the day, lasting until about 4pm. A few standouts were the 6-8 year old division competitors who straight out ripped! The judges couldn’t believe what they were witnessing. Both boys and girls were equally impressive. Around noon was the Keiki Push-In, where there were about 50 participants, including Andy Irons’ son, Axel. Escorted out to the break by his mom, Lyndie, Axel grabbed everyone’s attention by charging each wave and showing no fear, just like his father.

The amount of support by the community was tremendous. Throughout the day there were free giveaways and raffles, even a free lunch for all who observed. At the top of every hour was the chance to win awesome swag thanks to the sponsors. All of the proceeds from the raffles went back to the LIVE LIKE SION foundation.

In the evening, the awards ceremony took place at Kukuiula Harbor. With the sun setting in the background, each grom received a trophy for participating in the contest. Manu Nalu stood out in multiple heats, earning himself the Grom of the Day award. Kudos to the families, sponsors and volunteers for making the contest a total success. A great deal of hard work and time goes into making this event better each year. The Milosky family couldn’t have asked for a better community to represent Sion’s love for surfing and the keiki.