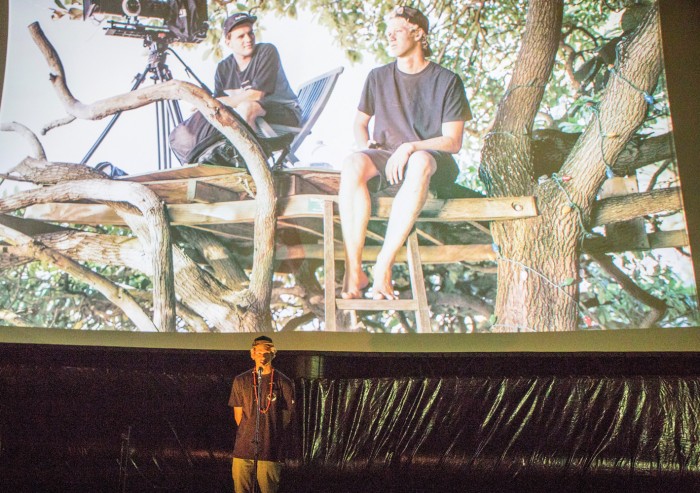 The high chance of rain didn’t thin the turnout at Sunset Beach Elementary for the surf movie seen ‘round the world. Neither did the apocalyptic traffic, which was bumper to bumper for at least a mile (yes, both ways) outside of the venue. And the realization that nearly every patch of soggy grass within eyeshot of the screen was practically filled before John John Florence’s epoch on film even began? The masses still came!

Because View from the Blue Moon was the greatest surf film ever made! Or so they said. And those saying this before viewing the film based their loaded statement on a few factors. First, the two mesmerizing trailers for the film that would star John John and 14 other surfers (like Filipe Toledo, Eli Olsen, Bruce Irons and the Florence brothers) traveling to 5 different destinations worldwide.

Next, the entire soundtrack, which Jack Johnson personally wrote a new ode for, was rumored to be equivalent to the melodies of the Greek Sirens.

Plus, the statistics behind the production were unfathomable. John John and director Blake Vincent Kueny partnered with Brainfarm, an award winning studio best known for its production of the Art of Flight. For View from a Blue Moon, the production team ran through 6 helicopters, numerous RED cameras, an army of drones and over 2,000 hours of editing for the 59 minute film.

Thus, the best ever claim did have logical merit. Now that the premiere is over and the smoke has cleared, what is the verdict? Was it truly the greatest film in the history of surf cinematography?

Scenes individually and collectively certainly made a case: the visual aesthetic looked second to none. Like, Planet Earth status. From the opening scenes of baby John John to location undisclosed barrels and even a roaring lion in a South African jungle, everything appeared so crisp and so real and so did John John himself!

While the majority of surf films in recent memory have focused on the surfers and the waves and few other things, View from the Blue Moon made a priority of capturing the sights and sounds that surround the world’s most notorious breaks. Like Brazil’s heavily populated favelas. Or the vast and deserted landscapes that fill the horizon in West Oz. Even Oahu, from the mountains to the sea.

And the Pipeline scenes! During each air, turn or barrel the entire Sunset Beach Elementary crowd at the showing – hundreds strong – cheered and bellowed accent-laden calls of excitement. The energy! It was as if the most exciting final in the history of the Pipeline Masters had descended in front of the people. The crowd roared and buzzed like the masses must have done in the Roman Coliseum as John John and company escaped the foamy grasp of these blue water monsters.

So does all of this make View from the Blue Moon the best film ever? While I have my personal opinions and critiques on the film, like a lack of an in-depth storyline and profile that would help us understand and more so relate to John John better, the long term implications seem much more important than playing Monday Morning Quarterback.

Like fine wine, Blake Vincent Kueny and John John Florence are growing older (both are in their early 20s) and therefore growing better in their respective niches. Thus, we have to believe that something along the same magnitude will come from this duo again. But this notion doesn’t just apply to them. Proof is now in the pudding that surf cinematography can reach incredible heights and create booming hype, even to the mainstream.

Either future surf productions will view the film as a competition, yet another challenge to best. And helicopter angles, RED cameras and sky high budgets will become part of the norm. Or View from the Blue Moon will cast a long, undefeatable shadow over productions that are to come.

Was it the greatest surf film of all time to date? Obviously subjective, but with the variables added together my vote is yes. Though I hope it doesn’t reign forever as the best, and I do wish future films would take Muhammad Ali-like swings at it, trying to knock the masterpiece off the mantle. Because if there’s one thing that Andy and Kelly taught us, it’s that competition and its blood, sweat and tears chisels the best out of everyone.

My two cents? For any filmmakers looking to get an upper hand on the next best thing to hit surf cinematography, I suggest following View from the Blue Moon’s narration formula. The production team hired Hollywood’s John C. Reilly (known for his roles in Step Brothers and Talladega Nights, among others), and the actor was seen mingling at the showing’s Surfer Bar after-party.

Personally, I can think of a laundry list of female actors in Hollywood that have great voices, would find our beloved sport of surfing interesting and would enjoy Chris Cote-dj’ed after-parties in Hawaii. How about starting with Emma Stone?