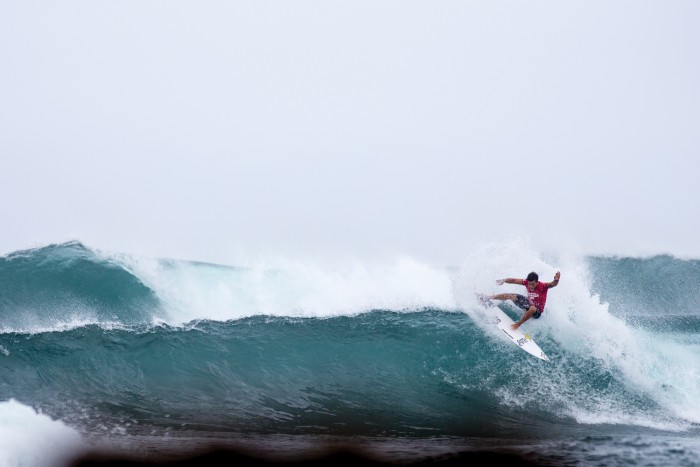 For the Record: Keanu Asing on the Underdog Mentality

Let’s wind back the clock and look at your 2015 rookie year. Do you have any resounding impressions from what you’ve experienced on the road?

Looking back on one year ago, it’s crazy. Obviously everyone thinks they know what they’re doing, but for my first year on tour it was such an eye opener. I learned so much in one year than I felt like I did in
4 whole years of high school, just mentally maturing. It was challenging, but nothing is easy. The feeling of working on a new challenges is really refreshing. Things that are hard are almost cool because everyone likes things that are easy. But I think easy is boring, bland and has no taste. I love the challenge and competitions have put me in my place and humbled in my own ways.

There was a lot of people telling me I’m not good enough, that I don’t do airs or do this and a combination of things that I can’t do and if you tell me i can’t do something, I’m obviously going to try and do it to my best. I don’t feel like I got things too easy and that I’ve worked for what I have. I’ve made sacrifices in my short career so far. I’m doing anything to help move forward. As long as it’s helping me move forward, I’ll jump on it. Going through the hard yards and struggling… if it helps in the long run I’ll do it. The challenge is that you got to work hard. When I see people that work hard, they deserve everything they get and they always move forward. And I’m so small, people are so in love with the big people on tour. Everyone’s tall or has good style like Jordy [Smith] or Owen [Wright] and everyone wants to be like them. I’m blessed with being small and I have to live with it. People definitely overlook me and I just prove to them it’s not about how big or tall you are, it’s all about heart. And everything this year and that I’ve gone through, nothing has been given. I had to work extra hard for what I got.

Any specific challenges that you faced throughout your rookie year?

My first event, I got smoked in my first heat and I told myself that I have to embrace this moment because it’s a long year and I can’t be over it already. I have to keep moving forward and either I keep losing or I figure out the formula and I beat the best guys. I went into the year thinking there’s a possibility I will get 25th in every event and if I do that, I might as well surf my heart out and not worry about results. I didn’t think I’d be in the position to re-qualify, I didn’t think it would happen like it has. Every event was such a different kind of competition and it’s a different way of competing. Every heat you paddle out
you have to limit your mistakes. That’s where these guys capitalize. I had a heat with [Kelly] Slater and I picked the wrong wave, did a bad turn and thought…these guys know.

At the 2015 Oi Rio Pro, you bested Gabriel Medina even though he had home field advantage. What was your mindset going into that heat? And what was that like?

You can’t safety surf and every time I have safety surfed, I lost. Before the heat with Gabriel [Medina] I was listening to music and people were screaming, chanting his name and I thought ‘wow this is crazy, this is Mike Tyson fighting anybody else’! It’s the biggest odds, these guys didn’t doubt their guy. He was going to win. For me, it was a moment of letting go of feelings and worry and of results and if my board works good and just do what I do. I got a chance, and an opportunity to beat the reigning world champ. It was now or never. I just went out and seized the opportunity and rose to the occasion. I landed the biggest air I’ve ever done in a contest. The crowd wasn’t too happy about it. And of course it was an upset, because every person I beat is an upset this year (laughs). Being on his home turf, it was crazy because he’s the best in the world and if I didn’t believe in myself and put the jersey on and to think I couldn’t beat him, I’m in the wrong sport and I shouldn’t be doing this. I had to believe in myself and you got to go out and do everything you can to stop him.