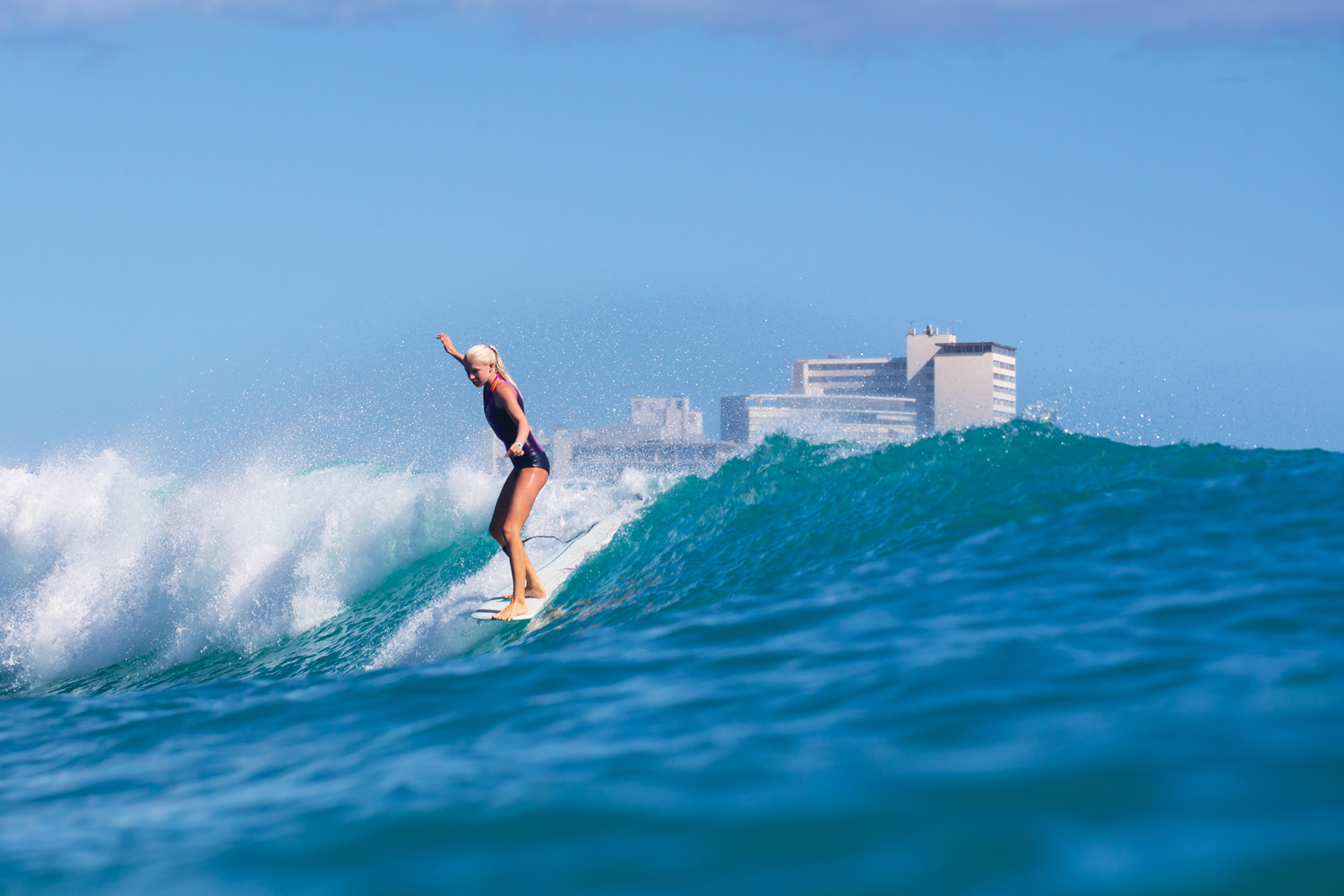 Freesurf’s interest in Ms. Mason Schremmer was piqued when we saw the surfer girl logging Queen’s in Waikiki during the China Uemura Wahine contest earlier this year. With golden hair and a knack for nose rides, Mason went on to compete at NSSA Nationals at Huntington Beach Pier, placing first in both Explorer Womens Longboard and Explorer Womens SUP divisions. The wahine also triumphed earlier in April at the HSA State Championship at Ala Moana Bowls, placing first in Girls SUP and second in Girls Longboard, not to mention her free surf sessions around Town have been plentiful.

Athletic and playful, the teen is garnering attention not only for her great contest results, but also for her soulful flair for freesurfing. With a grace on waves that seems well beyond merely fourteen years of age and only four on a board, Mason Schremmer has been clocking plenty of slide time this summer season.

My first wave memory is from when I took my first surf lesson at Waikiki Beach.

You seem to live amongst a family of surfers. Tell us about this dynamic? You recently placed 1st in two divisions at NSSA Nationals, congrats! Describe this event and how you felt during the comp?

NSSA Nationals was a really great event. I got to see a lot of my surfer friends from the mainland, which was fun! The waves were tricky during the comp because they were coming in all over the place and also because of the wind in the afternoon. I was a little nervous going into my heats because I hadn’t surfed at Huntington too much before, so
I tried to sit where the people in previous heats had been catching the best waves and getting the top scores.

Who are your biggest competitors?

Whoever is in my next heat.

Who do you love to surf with most and why?

I love surfing with my sisters the most because we always have the most fun with each other. When we surf together we get to split waves and catch party waves together!

My favorite surfer is Carissa Moore because she is an awesome surfer and is very humble and always smiling when I see her out in the water.

My biggest inspiration is watching girls like Carissa Moore, Coco Ho and Kelia Moniz surf because they are all great surfers and I hope to be able to surf as well as they do one day.

Tell us about the biggest wave you ever charged...

The biggest wave I have ever charged was at Turtle Bay last winter for a SUP comp. I was having a hard time getting out on my SUP because the waves were so big, but when I finally made it to the outside I caught one of the biggest waves I have ever ridden!

Any surf trips in the near future?

My family and I plan on going back to Australia for the Noosa Festival of Surfing later this year!

Your other hobbies include…

Your ultimate surf goal is…

I want to win a world title one day!

Last words for the Freesurf audience…

See you in the water!